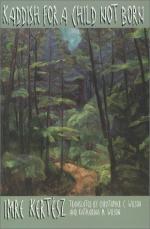 Compare & Contrast Kaddish for a Child Not Born by Imre Kertész

Imre Kertész
This Study Guide consists of approximately 29 pages of chapter summaries, quotes, character analysis, themes, and more - everything you need to sharpen your knowledge of Kaddish for a Child Not Born.

1960s: The Hungarian government, recovering from the Revolution of 1956, enacted policies to engender a more liberal society and a healthier economy.

Today: Racial tension is still evident in the United States but civil rights of all individuals, regardless of race, ethnicity, religion, or medical condition are protected under the law.

1960s: The Berlin Wall is built in 1961 as the cold war escalates. The wall separates Soviet-occupied East Berlin from West Berlin.

Today: The cold war ends in 1991 with the dissolution of the U.S.S.R. Relations between the United States and Russia improve in the following decade.

More summaries and resources for teaching or studying Kaddish for a Child Not Born.

Kaddish for a Child Not Born from BookRags. (c)2022 BookRags, Inc. All rights reserved.