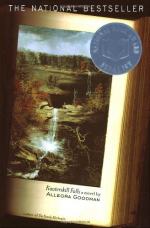 Allegra Goodman
This Study Guide consists of approximately 55 pages of chapter summaries, quotes, character analysis, themes, and more - everything you need to sharpen your knowledge of Kaaterskill Falls.

Kaaterskill Falls, by Allegra Goodman, revolves around members of the Jewish Orthodox summer community of Kaaterskill Falls, New York, in the late 1970s. The character-driven novel delves into the lives of those summer visitors. The summer visitors, all members of the Rav Elijah Kirshner’s New York City community, look to the Rav not only as their guide to the faith, but as the authority governing all activities within their community. Among the community are the Rav’s son, Isaiah, and Isaiah’s wife, Rachel. Isaiah and Rachel are faithful and loyal to the Rav, while Isaiah’s older brother, Jeremy, is an academic who is rarely ever around. As the Rav’s health begins to fail, the question of who will succeed him arises.

The community also includes a young married couple (Isaac and Elizabeth) and their five daughters. At times, Elizabeth feels warm and happy in her faith. But, at other times, she feels as if she has limited opportunities as a woman because of it. Elizabeth, with concerned support from her husband, receives the Rav’s permission to open up a kosher grocery shop in Kaaterskill. At the same time, Renee, the teenage daughter of Andras and much younger wife, Nina, begins to recoil against her parents’ authority. Renee befriends a Syrian Christian girl named Stephanie, who is very much a feminist. Stephanie encourages Renee to defy the norms expected of Renee. Nina is very traditional and proves to be Renee’s greatest obstacle. Andras, a survivor of the Holocaust, is deeply haunted by the past and envies Nina’s life having never experienced such tragedy. While faithful, Andras is also less concerned about keeping the outside world at bay, as the community has oriented itself inward to insulate itself. As such, he allows Renee to defy Nina, but only to an extent.

Despite some concerns about the nature of the community among some members like Andras and Elizabeth, the vast majority of members are content, happy, and supportive of the way the community handles itself. The Jewish summer community generally gets along with the year-round local community in Kaaterskill, who look to Judge Taylor, the Schermerhorn sisters, and Michael King as their leaders. Locals worry about the Orthodox community being seasonal and insular, rather than truly caring about the town they visit. Of chief concern is Michael King, formerly Klein, son of Herb Klein. King has been buying up land and selling it to the Orthodox community for vacation homes.

Sadly, Rav Kirshner dies without formally naming a successor. Isaiah naturally becomes the successor, of which the community approves. He leaves everything, except his library, to Isaiah and Rachel. Kirshner leaves his library to Jeremy, which infuriates and shocks Isaiah and Rachel given Jeremy’s lack of family loyalty. Jeremy flippantly tells his brother and sister-in-law he will sell the library for fifty-thousand dollars. This prompts Isaiah and Rachel to sell family land at nearby Coon Lake. When King expands his operations to nearby Coon Lake, Taylor and the locals have had enough. Taylor himself purchases the Kirshner family land King intends to buy. This stops the development of the area. Meanwhile, Jeremy is offered money for the library by Isaiah and Rachel, only for Jeremy to tell Isaiah and Rachel he never intended to sell.

Elizabeth, when she branches out from her store into catering, is found to have been unfaithful to the permission she received from Isaiah’s father. Isaiah, as new Rav, revokes Elizabeth’s permission to have a store. Elizabeth is devastated. Andras, however, reminds her that she she is not only Jewish, but an American. As an American, she can do as she wishes. This prompts Elizabeth to get back into the business. Andras, meanwhile, sides with Nina in reigning in Renee. Jeremy comes to realize the library was not an act of love from his father, but a mark of disapproval, with the idea being that Jeremy is not the man his parents wanted him to be. Jeremy then gifts the library to Isaiah and Rachel. The summer in Kaaterskill continues on, and members of the Orthodox community look forward to the time ahead.

More summaries and resources for teaching or studying Kaaterskill Falls.