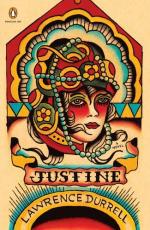 Lawrence Durrell
This Study Guide consists of approximately 29 pages of chapter summaries, quotes, character analysis, themes, and more - everything you need to sharpen your knowledge of Justine.

The story circulates around four people during the period leading up to World War II. The story is set in Alexandria, Egypt. The city is a major part of the story with the narrator claiming that the city and its ways have a hold on the inhabitants and forever mark them. The four people are the narrator - who is never called by name - his girlfriend Melissa, the woman with whom he has an affair Justine, and Justine's husband Nessim. As the story opens, the narrator tells of his life at the end of the story in which he lives quietly, raising Melissa's child and doing little else. He then changes the setting to his life in Alexandria.

The narrator is a teacher and had been barely making ends meet when he'd met Melissa. She is a dancer and there is an immediate connection. She throws over an older man who'd contributed to her upkeep only marginally in favor of the narrator, probably because he had shown her a great tenderness and care when she was near death from a dose of Spanish Fly. They are soon living together and it's because he wants to buy her a new coat that he agrees to speak at a lecture. It's after this lecture that Justine approaches him and takes him back to meet Nessim. Soon, the narrator and Justine are spending a great deal of time together, sometimes with Nessim and Melissa and other times alone. The narrator notes that Justine is not in his social class and that she often pays their way, facts that soon matter little to him.

As time passes, the narrator and Justine become involved and their affair impacts both Nessim who fears that he is losing Justine and Melissa who fears that she can't compete with Justine. Over time, Melissa confronts Nessim about the affair, forcing Nessim to face the issue. He initially tries to pay her to keep quiet but they come to realize they are both being wronged by the actions of the narrator and Justine, a realization that brings Melissa and Nessim together as lovers. Melissa then tells the narrator that she must go away because of an illness and leaves Alexandria.

Justine had been raped by a man named Capodistria and Nessim arranges a hunting trip in which both Capodistria and the narrator are present. Though it's never official, it seems likely that Nessim kills Capodistria. Nessim and the narrator return to find that Justine has left the city. The narrator agrees to take a position as a teacher in Upper Egypt and leaves the city. Some two years later he discovers that Melissa is dying and asking for him. He returns to the city too late but finds that Melissa has left behind a daughter - her child and Nessim's. Nessim is searching for an adoptive family for the child because he believes Justine will never return to him as long as he has the child. The narrator takes the child to raise as his own.

More summaries and resources for teaching or studying Justine.