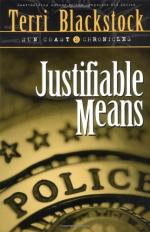 Terri Blackstock
This Study Guide consists of approximately 22 pages of chapter summaries, quotes, character analysis, themes, and more - everything you need to sharpen your knowledge of Justifiable Means.

"Justifiable Means" is a Christian mystery novel by Terri Blackstock that follows the pursuits of Detective Larry Millsaps to bring justice against a murdering rapist.

Summoned to the scene of a rape, Detective Larry Millsaps and his partner, Tony Danks, are surprised to discover the victim, beautiful 23 year-old Melissa Nelson, is acting rationally and providing the police with all the information they need to arrest her assailant, Edward Soames. Tony is suspicious of Melissa, but Larry is smitten with her. Despite her rationality, Melissa is beside herself with fear, and she leans on Larry. Over time, the two develop romantic feelings for one another, which Tony believes is confusing Larry's objective clarity. Through an investigation, Larry and Tony discover that Melissa is trying to set up Soames, who has had his named changed from Edward Pendergrast because he has been accused of rape several times in the past. It is further revealed that Melissa's sister, Sandra, had been raped by Pendergrast, and had committed suicide when Pendergrast didn't go to jail.

Larry confronts Melissa with the truth and Melissa begs him to keep quiet. Larry, a devout Christian, wrestles with his faith and his morality, and prays to God, seeking help. Melissa, meanwhile, comes to the decision that she doesn't want to get Larry in trouble, and turns herself in. She is sentenced to six months in jail. Meanwhile, Larry and Tony stake out Pendergrast, and with the help of his next intended victim, Karen Anderson, set up a case against him. When Pendergrast kidnaps Karen, Larry and Tony spring to her rescue, and during a violent struggle, Pendergrast is killed. This helps compel the state to release Melissa on probation. Melissa and Larry begin dating.

More summaries and resources for teaching or studying Justifiable Means.