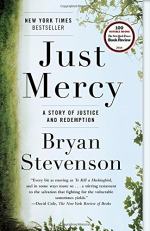 Bryan Stevenson
This Study Guide consists of approximately 43 pages of chapter summaries, quotes, character analysis, themes, and more - everything you need to sharpen your knowledge of Just Mercy.

America, with its long history of racial tensions between whites and non-whites (as well as tensions between genders and between the wealthy and the poor) is the overall, broad-strokes setting for the action and considerations of the narrative.

As a region, the Southern United States (with its history of slavery and extreme economic disparities) is a similarly broad-strokes setting for the story and its contemplations, albeit one with slightly less geographical scope than the country as a whole. There is a sense, however, that the tensions between the various elements outlined above are more concentrated, more virulent, and more corrupt in this particular community of states.

The Southern state of Alabama is the setting for much of the book's narrative action and events. Like so many of its fellow Southern states, the experience and history of racism permeates or defines almost every...