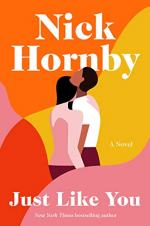 Nick Hornby
This Study Guide consists of approximately 33 pages of chapter summaries, quotes, character analysis, themes, and more - everything you need to sharpen your knowledge of Just Like You.

Just Like You Summary & Study Guide includes comprehensive information and analysis to help you understand the book. This study guide contains the following sections:

This detailed literature summary also contains Quotes and a Free Quiz on Just Like You by Nick Hornby.

The following version of this book was used to create the guide: Hornby, Nick. Just Like You. Riverhead Books, 2020.

Hornby’s novel is divided into 18 chapters, the majority which take place in the year 2016, with the exception of the final chapter which resumes two years later. The narrator’s focus often shifts from Joseph to Lucy within chapters. At the start of the novel, Lucy is 42 while Joseph is 22. Lucy is recently split up from her husband, Paul, who is an alcoholic. Joseph works several part-time jobs but has no real ambition.

Hornby begins the novel by describing one morning at the butcher shop. It is the first time Joseph and Lucy take real notice of each other. Lucy asking Joseph to babysit her children acts as a catalyst for the main plot line of the novel. At first, they try to ignore their attraction for each other. They try dating other people. Joseph goes out with a girl named Jaz he meets at the leisure center where he works. Lucy goes out with a famous author named Michael Marwood who she meets at a party. Each shyly flirts with the other until one night, after Lucy lies about having a reason to go out so that Joseph comes over. Lucy confesses her feelings to Joseph and they have sex.

The second third of the novel focuses on Lucy’s affair with Joseph. Joseph spends nearly every night at Lucy’s place, worrying his mother. Joseph and Lucy keep their relationship secret. Their routine consists of having sex and watching television. Still, each is devoted to the other. Lucy gives Joseph a sense of direction in life. He starts to pursue a career as a DJ and asks Jaz to sing for his track. Meanwhile, tensions in Britain are high between classes and races as the referendum approaches. Eventually, Lucy and Joseph resume their normal lives by going out with friends and attending their own parties. They mutually decide to end things.

A few months after their breakup, Lucy invites Joseph and his new girlfriend, Hanna, to come to a cottage with her and the boys. The trip passes peacefully enough but ends with Hanna and Joseph breaking up and Lucy and Joseph rekindling their love.

The final third of the novel focuses on Lucy and Joseph’s struggle to navigate the world as an official couple. They manage to conquer all the obstacles they initially worried about. Lucy charms Joseph’s friends and family, and Joseph equally gets along well with Lucy’s crowd. Still, each feels insecure in their relationship. One day, Joseph cheats on Lucy with Jaz. His mother forces him to confess to Lucy and the two go a while without speaking.

In the final chapter of the novel, Hornby provides readers with a glimpse into Joseph and Lucy’s life two years after their breakup. Joseph has only one job now. He is the assistant manager at the leisure center. He and Lucy are together, as an official couple, and no similar incidents of infidelity ever occur again. They attend Joseph’s sister’s wedding together and do their best to take each day as it comes, without fretting about the distant future.

More summaries and resources for teaching or studying Just Like You.

Just Like You from BookRags. (c)2022 BookRags, Inc. All rights reserved.