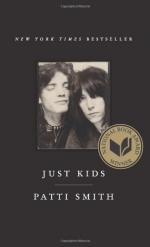 Patti Smith
This Study Guide consists of approximately 29 pages of chapter summaries, quotes, character analysis, themes, and more - everything you need to sharpen your knowledge of Just Kids.

Rimbaud's Illumination is the book that inspires Patti to become a writer. The book influences her writing and helps her fulfill her dreams. Rimbaud is her personal hero and her love of his writings brings her success in the music industry.

Hotel Chelsea is a hotel in New York where struggling artists and writers would stay. The manager would take art work or writing as collateral for a room. Patti met many artists and musicians that would become famous in later years.

Max's Kansas City is a restaurant in New York where Andy Warhol and many famous artists and musicians would frequent. Patti and Robert went there in an attempt to meet Andy Warhol because he is a hero of Robert's. They became part of the new court at Max's Kansas City.

More summaries and resources for teaching or studying Just Kids.