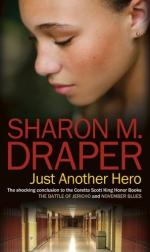 Sharon Draper
This Study Guide consists of approximately 34 pages of chapter summaries, quotes, character analysis, themes, and more - everything you need to sharpen your knowledge of Just Another Hero.

This detailed literature summary also contains Topics for Discussion on Just Another Hero by Sharon Draper.

Just Another Hero is the third book in a trilogy by author Sharon M. Draper. It follows a group of students at an urban high school in Cincinnati, Ohio as they go through a series of life-changing experiences over the course of one month.

Arielle Gresham is spending her senior year alone after her self-absorbed behavior has alienated all her friends and caused her to lose her boyfriend, Jericho Prescott, to the heavy and much less attractive Olivia Thigpen. Although she admits that she has behaved badly, Arielle is still a compassionate person. She demonstrates her compassion when she comes to the rescue of Osrick Wardley, a small, bookish, and somewhat odd boy in her class who is the frequent target of bullies. When Olivia interrupts a group of bigger boys who are humiliating Osrick, the two form the beginning of a tentative friendship that will help Osrick turn his life around.

Arielle has problems at home too. She lives in a large, beautiful home and has all the material comforts she could ask for, but they are provided by Chad, the third person in a series of men that her mother has married since her father died in an accident. Although Arielle enjoys and appreciates her clothes and electronics, she pays a high emotional price because her stepfather forces both her and her mother to account for every penny they spend each day and doles out punishments for anything he considers irresponsibility.

Arielle's classmate, Kofi Freeman, is facing problems of his own. He is thrilled when he is accepted to MIT, but worries about how he will pay for such an expensive university. Kofi's family is once again on the verge of being evicted because his father gambles away everything he earns and his mother is too wrapped up in alcohol and clubbing to pay attention to her son. Kofi is also harboring a secret, even from his girlfriend, Dana. After breaking his arm in a club initiation stunt that killed his close friend Josh, Kofi has gotten addicted to prescription painkillers.

Douglass High School is being plagued by two ongoing problems. Money, small electronics and other items are being stolen from both students and teachers, and someone sets off the fire alarm on a regular basis. Osrick and bad-boy Eddie Mahoney are privately suspected by many students as the possible thief, and most people agree that the person setting off the fire alarm is Crazy Jack Krasinski, a seemingly-harmless kid who plays a snare drum and cymbals in the band - and often in the schoolyard - but his antics have become so commonplace that no one pays much attention anymore.

As the plot moves forward, Arielle's privileged life is gone forever when her stepfather's emotional cruelty reaches a new level. She returns home one day to find that he has transferred to a job in California, but not before clearing every item out of their home, including her clothes, every scrap of food, and even the toilet paper, landing Arielle and her mother in a homeless shelter. Kofi's elation at receiving a scholarship that will pay all his college expenses is tempered when Dana discovers his drug problem and convinces him to go cold turkey. Osrick's invisibility to his classmates puts him in a position to discover the surprising identity of the school thief. But on the heels of that revelation, Jack's increasingly odd behavior leads to a psychotic break and when he holds his classmates hostage with an AK-47 assault rifle, an unlikely hero emerges to save them.

More summaries and resources for teaching or studying Just Another Hero.