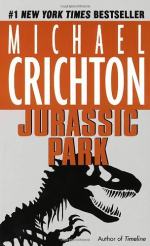 Michael Crichton
This Study Guide consists of approximately 50 pages of chapter summaries, quotes, character analysis, themes, and more - everything you need to sharpen your knowledge of Jurassic Park.

As the book opens, a previously undocumented breed of lizard is attacking children in Costa Rica. When an American girl named Tina Bowman is attacked, she draws a sketch of the lizard. The sketch leads Dr. Marty Guitierrez to find the carcass of a lizard he cannot identify and sends it to experts in New York to be analyzed. A technician named Alice Levin believes the carcass to be that of a dinosaur and faxes an X-ray of the lizard to famous paleontologist Alan Grant to be analyzed.

Alan Grant, along with his graduate student Ellie Sattler, is busy excavating dinosaur nesting grounds in Snakewater, Montana, when they receive the fax. They are puzzled by the X-ray, which precisely resembles the body of a dinosaur named procompsognathid. A man from the Environmental Protection Agency visits Alan Grant and asks him a lot of questions about his biggest benefactor, John Hammond. The EPA agent believes John Hammond is “up to something” and tells Alan Grant about a mysterious island John Hammond has purchased, along with stockpiles of amber. After the agent leaves, Alan gets a call from John Hammond inviting him to visit his island the next day. Alan initially declines, but John talks him into coming, along with Ellie Sattler.

Along with Alan and Ellie, John Hammond picks up mathematician Ian Malcolm and computer systems engineer Dennis Nedry before heading to Isla Nublar in Costa Rica. John Hammond’s lawyer, Don Gennaro, is already on board the plane and has asked the experts to come to the island to judge its safety. No one on board, aside from John Hammond, has physically seen Isla Nublar.

When the group arrives on the island, they discover John Hammond has funded genetically manufactured dinosaurs using DNA from mosquitoes fossilized in amber. The guests are simultaneously awestruck and frightened by the animals. John Hammond’s two grandchildren show up by helicopter and a tour of the grounds is scheduled. No one is aware the computer engineer, Dennis Nedry, has made a deal with competing bioengineering firm Biosyn to steal dinosaur embryos. In order to commit the crime, Dennis plans to shut down all the security and power systems of the park, including the electrified fences keeping the dinosaurs away from each other and from the humans.

When the tour group is out touring the park, Dennis shuts down the power and security systems. His intention is to drive to the meeting place, drop off the embryos and return in a matter of six minutes. Dennis gets lost though and is killed by a poisonous dilophosaurus before reaching the dock. The park is plunged into darkness and no one in the control room is able to get power back up or the phone lines working. A T-Rex attacks the tour vehicles, killing the park’s publicist and injuring Ian Malcolm. Alan Grant and the kids survive the attack and band together to attempt returning to the lodge safely. Ellie Sattler, Don Gennaro and the park veterinarian are unaware of the chaos in the park as they drive in their Jeep toward the lodge, returning from caring for an ill stegosaurus.

As people in the control room attempt to restore power and tranquilize dangerous dinosaurs, Alan and the kids try to make their way back to the lodge. Alan’s conclusion that the animals, that were earlier supposedly all female, are mating is proven as he ventures through the jungle. The trio is confronted several times by a T-Rex and barely makes it out alive from each encounter. Eventually they find a golf cart and ride it out of a tunnel toward the lodge, where they discover they are not much safer. Velociraptors begin stalking the building and all of the humans inside must work together to stay alive. Tim Murphy, the eldest of the kids, is able to get the power and phone lines restored in enough time to call for help. Several characters die as a result of the marauding dinosaurs, however, including the park’s creator John Hammond.

Before help arrives, Alan, Ellie and Don decide to find the velociraptor nest and see if all of the animals are accounted for on the island. Before they can get a final count, the raptors rush out of the nesting area to the beach and seem excited to see a passing freighter ship. Alan decides the raptors have a desire to migrate and wonders if they already have. Costa Rican authorities arrive to pick up the survivors before Alan can finish his study of the raptors and the island is destroyed by bombing.

In the weeks that follow, Alan is sequestered in San Jose, along with the other people from the island, and questioned about what happened on Isla Nublar. Dr. Guitierrez comes to visit Alan and asks him about a strange crop-eating pattern developing in a mountainous range of the country. Alan confirms that it sounds like a migratory mannerism and the book ends with the implication that the raptors have already infiltrated the mainland.

More summaries and resources for teaching or studying Jurassic Park.