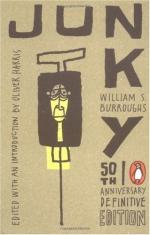 William S. Burroughs
This Study Guide consists of approximately 38 pages of chapter summaries, quotes, character analysis, themes, and more - everything you need to sharpen your knowledge of Junky.

This detailed literature summary also contains Topics for Discussion and a Free Quiz on Junky by William S. Burroughs.

William Lee—nicknamed Bill—is a thirty-year-old white male living in New York City who begins using morphine and develops an addiction to narcotics—or junk. Over the next five years or so he uses drugs, engages in petty crimes and drug peddling, and moves to Texas, New Orleans, and finally Mexico City all the while intermittently kicking his junk habit.

The novel begins around 1945 when Bill takes his first shot of morphine. Over the next year he continues to use junk in various forms and develops a strong dependency. He moves through the shady neighborhoods of New York City engaged in petty crime, drug peddling, and constant habitual injection of morphine. He is accompanied by his wife and children though they are hardly mentioned in the text. Bill's circle of shady associates grows as his legitimate interests diminish. He is finally embroiled in a circle of police informers and illegal drug use and flees impending legal trouble, stopping only to receive a medical cure.

Bill travels to Texas and settles briefly in the Brownsville area, remaining clean for several months. Apparently bored, he then moves to New Orleans and engages in the activities of that city including casual homosexual sex. After several months he resumes using drugs and quickly develops a habit. Bill then engages in the predictable cycle of petty crime, drug peddling, and habitual drug injection. New Orleans becomes the focus of a major anti-drug law enforcement action and Bill is eventually arrested. Upon his release from jail, and while his trial is pending, he returns to Texas where he moderates his drug use.

As Bill's trial approaches it becomes likely that he will serve a lengthy prison sentence. Bill refuses to allow that to happen and flees to Mexico City. In Mexico Bill remains largely drug-free for about a year, instead spending his days reading newspapers in cafés and soliciting homosexual encounters with prostitutes or various willing partners. Eventually Bill meets other junkies and once again becomes addicted. After about a year of using junk Bill decides it is time to quit again. Following several failed attempts, Bill turns to heavy drinking and Benzedrine to kick junk during a period lasting several months; his health suffers a precipitous decline and his behavior becomes erratic. Over the next several months, however, he recovers and remains drug-free. He is joined by several associates from New York City, his wife leaves him, and he focuses his attention on a new drug from South America which promises to stimulate latent telepathic powers. The novel concludes with Bill traveling south in search of the new drug.

More summaries and resources for teaching or studying Junky.