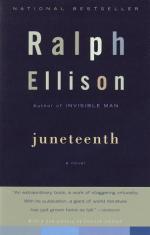 Ralph Ellison
This Study Guide consists of approximately 66 pages of chapter summaries, quotes, character analysis, themes, and more - everything you need to sharpen your knowledge of Juneteenth.

This detailed literature summary also contains Bibliography and a Free Quiz on Juneteenth by Ralph Ellison.

The title comes from an event that occurred on June 19, 1865. On this date in history, General Gordon Granger landed in Galveston, Texas to deliver the news that the Civil War had ended and that Abraham Lincoln had freed the slaves. What is most notable about this event was that Lincoln's Emancipation Proclamation was given on January 1, 1963, nearly two and half years before Granger reached Texas. Hence the vague term "Juneteenth" holds the innuendo of a vague date in history.

Similar to Ellison's other works, most notably his first novel Invisible Man, Juneteenth questions the cultural fabric of the United States. It digs into the underbelly of America, uncovering the foul history of racism and segregation in America. However, in classic Ellison style, the work does not fester in the negative. Juneteenth is an affirming narrative in that the black characters are strong, educated and cognizant. They do not cling their oppression. Instead they yearn for something better and strive to find a way to achieve a better Americanot a better black Americabut a better overall America where the segregated races coexist and prosper, where racism is not forgotten, but absolved. Unfortunately, Ellison's dream as it existed in his mind and the minds of his protagonists has yet to be achieved. Nonetheless, his works, like Juneteenth, can only help to enable Americans with the knowledge necessary to move our nation closer to Ellison's aspiration.

More summaries and resources for teaching or studying Juneteenth.

Juneteenth from Gale. ©2005-2006 Thomson Gale, a part of the Thomson Corporation. All rights reserved.