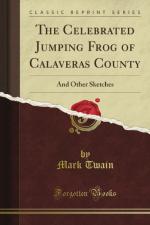 Mark Twain
This Study Guide consists of approximately 35 pages of chapter summaries, quotes, character analysis, themes, and more - everything you need to sharpen your knowledge of The Celebrated Jumping Frog of Calavaras County.

Charles W. Chesnutt's The Conjure Woman (1899) uses the tall tale and frame narrative forms to examine life in the American South of the nineteenth century.

Bret Harte's "The Outcasts of Poker Flat" (1869) and "The Luck of Roaring Camp" (1868) offer portraits of life in mining camps and on the American frontier.

In the title story of the 1993 collection One Good Story, That One, Native American writer Thomas King satirizes the importance of storytelling in anthropological studies and the conflicts that occur between white society and Native Americans. In this tale, the narrator hoodwinks his white audience by telling how, supposedly according to his tribe's beliefs, the world was created.

More summaries and resources for teaching or studying The Celebrated Jumping Frog of Calavaras County.

The Celebrated Jumping Frog of Calavaras County from Gale. ©2005-2006 Thomson Gale, a part of the Thomson Corporation. All rights reserved.