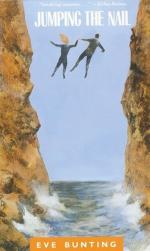 Eve Bunting
This Study Guide consists of approximately 26 pages of chapter summaries, quotes, character analysis, themes, and more - everything you need to sharpen your knowledge of Jumping the Nail.

This detailed literature summary also contains Topics for Discussion and a Free Quiz on Jumping the Nail by Eve Bunting.

Jumping the Nail by Eve Bunting centers around Dru, a teenage girl from La Paloma, California, who watches her peers jump off the Nail, a high cliff. When her depressed friend Elisa jumps, Elisa has a mental breakdown.

Dru just graduated La Paloma High School. She is a smart girl, who has a scholarship to Northwestern. She dates Mike, a gorgeous, popular and kind-hearted guy. No one noticed her before she started dating him. She feels like an outsider in his group because everyone is rich, beautiful and wears designer clothes. Dru lives in an average house her family rents.

Dru and Mike learn that Scooter, Mike's friend who loves attention, will jump the Nail. The Nail is a 90 foot cliff. A girl had jumped the Nail a while ago. She hit the rocks and is now in a wheelchair. They go to the Nail to watch the jump and they learn Elisa, Dru's best friend and Scooter's girlfriend, will jump as well. Dru gets very upset because Elisa struggles with depression. Dru and Mike try to talk Scooter and Elisa out of jumping, but they jump.

When they come out of the water, Elisa is in shock and will not speak. Dru takes care of her at Elisa's house. Elisa says a drowned girl in a car underwater talked to her. The girl asked her to stay. Elisa has a mental breakdown. Scooter comes over, demanding Elisa go to a party with him. She does, which shows she is in an unhealthy relationship where Scooter controls her.

After their jump, other people want to jump. Tom and Grant, twin brothers, jump to impress Tom's girlfriend, Diane, who cheats on him. They jump at night and Tom has to get 27 stitches in his head. Dru and Mike realize they must tell an adult about the jumping, but hold off a day.

Meanwhile, Dru and Mike are very much in love. He asks her to stay with him in California. Her mother says Mike is rich and she could have an easy life with him, so she encourages Dru to stay as well. Dru must make a choice between Northwestern (in Chicago) or Mike.

Elisa is missing. Dru and Mike search for her, finding car tracks that drive off a cliff. Elisa has driven her car off the cliff, committing suicide. Divers try to bring up her body, but they cannot. Her body stays in the car, just like the drowned girl. Dru is heartbroken over Elisa's death. But in the end, Dru realizes she should not make decisions based on a guy. She decides to go to Northwestern after all. She tells Mike she loves him and that she will be back. But Elisa will not be back. Dru mourns Elisa, thinking she should be alive.

More summaries and resources for teaching or studying Jumping the Nail.