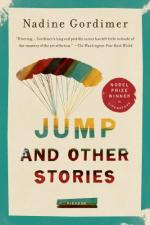 Plot Summary
+Chapters Summary and Analysis
Jump
Once Upon a Time and The Ultimate Safari
A Find and My Father Leaves Home
Some Are Born to Sweet Delight
Comrades, Teraloyna, and The Moment Before the Gun Went Off
Home
A Journey
Spoils
Safe Houses
What Were You Dreaming?
Keeping Fit
Amnesty
Characters
Objects/Places
Themes
Style
Quotes
Topics for Discussion
Order our Jump and Other Stories Study Guide

Nadine Gordimer
This Study Guide consists of approximately 31 pages of chapter summaries, quotes, character analysis, themes, and more - everything you need to sharpen your knowledge of Jump and Other Stories.

Jump and Other Stories Summary & Study Guide includes comprehensive information and analysis to help you understand the book. This study guide contains the following sections:

This detailed literature summary also contains Topics for Discussion on Jump and Other Stories by Nadine Gordimer.

Jump and Other Stories consists of sixteen pieces of short fiction. Most are set in The Republic of South Africa before the end of the Apartheid. Even those set elsewhere, such as fictional places or unnamed African nations, contain some references to racial inequality or political oppression of ethnic groups.

The first story and the one mentioned in the book's title, "Jump," tells of a former counter-revolutionary who has turned himself in to the authorities of the country where he was once considered a terrorist. Apparently over the years the man has had a change of conscience and wants to make amends for past wrongs. Other stories, such as "Home", also directly confront the inequalities of the Apartheid system. In "Home", a woman's mother, sister, and brother are arrested for suspected subversive activities, and they are held under a special law that keeps them from family and even lawyers.

Other stories mention the inequalities of a racial unjust system or make reference to economic hardships in less direct ways. In "The Moment Before the Gun Went Off", a white man accidentally shoots his black employee. In "Keeping Fit", a white man witnesses mob violence and has to take shelter in a shantytown, the kind of place that few whites other than police ever see.

While political topics play a large role in the plots of most of the sixteen stories, some also cover other human relationships like marriage. In "A Journey", a woman aboard an airplane sees a mother and two children, and she invents in her mind an entire story summarizing their lives. In "Home", which is mostly about political oppression, the story also covers familial relationships. The lead female character struggles with her worry over her mother who she has never had a good relationship with, and the lead male character begins to doubt his wife's fidelity. Marital infidelity is a major element of "Safe Houses", when a fugitive from the law uses an affair with a married woman as a means to hide from police.

Human's relationship with nature is another plot element in some of the stories. In "The Ultimate Safari", a group of refugees must cross a national park and wildlife refuge in order to escape violence and starvation. During one evening, the group is almost attacked by lions. In "Spoils", a group of weekend guests at a wildlife refuge witness some lions feeding on a zebra. The following day, in viewing the zebra carcass, they also learn an important lesson about conservation.

While the plot of most of the stories focuses on how individuals perceive the world around them, one story in particular stands apart. "Once Upon a Time" is a parable told in the fashion of a fairy tale by an author who professes never to write children's stories. In this tale, a family's paranoia and fear runs rampant until their efforts aimed at providing protection cause grave harm to a child. Like all fair tales, this story has a lesson, and it is a lesson that becomes terrifyingly vivid.

More summaries and resources for teaching or studying Jump and Other Stories.

Jump and Other Stories from BookRags. (c)2022 BookRags, Inc. All rights reserved.