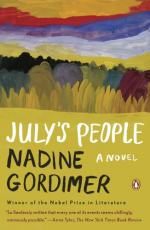 Nadine Gordimer
This Study Guide consists of approximately 23 pages of chapter summaries, quotes, character analysis, themes, and more - everything you need to sharpen your knowledge of July's People.

July is the male servant of the Smales family—Bam, Maureen, Royce, Victor and Gina. The white family has escaped the fighting in their village in the Smales’ bakkie under July’s direction. When fighting overtakes the Smale’s hometown, they abandon their comfortable suburban life and find a savior in their servant, July, who offers them a way to safety. After a three-day journey, they arrive in July’s village and occupy his mother’s hut, much to his mother’s dismay.

The Smales’ struggle to adapt to rural life and to life without their former servant. They must learn to live without the simplest of suburban accommodations such as hot water for a bath. Where they once enjoyed a master suite, seats from the car now double as beds. They battle the heat, fleas, cockroaches, and mice, constantly hoping for good news from home. July deals with the threat to his person, family, and community that the presence of this white family brings. Over the course of several weeks, the Smales and July struggle to redefine their relationship. What was once so clear and familiar to the Smales—master and servant—is now unclear and ill-defined. Maureen both offers to take on more responsibility, while simultaneously trying to continue to control July and his choices.

The tension in his family and the unwanted attention from the community at-large strains July to his breaking point. The village chief hears of their presence and summons them to speak with him.

The fighting inches closer to the remote village, and the local mine shuts down. The book ends without a definitive conclusion. An aircraft lands in the village. No one is certain whether it is an ally or enemy plane. For Maureen it does not seem to matter. She runs toward the plane without any thought for her husband and three small children.