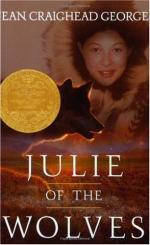 Julie of the Wolves Setting & Symbolism

The tundra is the treeless, frost-heaved landscape north of the Arctic Circle. Julie initially loses her way in this landmarkless landscape, but she comes to understand its ways and even to thrive in its winter.

After his wife's death, Kapugen walks his daughter all the way to the remote settlement of the seal camp. A tourist center during the summer hunting season, in the winter it is a sanctuary for men who follow the old Eskimo ways. Miyax lives here between the ages of four and nine.

Nunivak is the island settlement where Miyax was born and where her father was manager of the reindeer herd. Miyax is brought back to Nunivak by Aunt Martha and goes to school here, shedding the old Eskimo ways, between the ages of nine and thirteen.

Julie of the Wolves from BookRags. (c)2022 BookRags, Inc. All rights reserved.