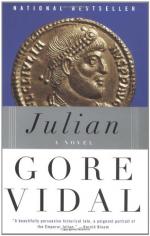 This detailed literature summary also contains Topics for Discussion and a Free Quiz on Julian by Gore Vidal.

The story begins as two old friends, Libanius and Priscus, correspond regarding a manuscript written by Julian. Though Priscus agrees to send a copy of the manuscript to Libanius, he declines to be part of the published project. He does, however, add notes throughout the story, sometimes correcting Julian's take on situations and sometimes adding details not included by Julian. Julian's early childhood was fraught with danger and intrigue. As a youngster, Julian was ripped from his home and those he loved - including his father and a beloved teacher. His father was then killed by Julian's own cousin, Constantius. Julian says he was certain he would be next and spent most of his younger years worrying for his life. Julian's brother, Gallus, was made Caesar long before Julian even realized he craved the power of the political offices of the day. However, Constantius had Gallus beheaded soon after naming him Caesar. Julian himself had agreed to become a monk at an early age, but not through any dedication to the brotherhood. He'd allowed Constantius and others in power to believe he would become a monk in an effort to prove he had no political aspirations and was not a threat to the throne. He claims that the time studying was the best of his life, though he later indicates a true love of his political power.

Soon after Gallus was beheaded, Constantius summoned Julian. Julian believed that he would also be killed, but he found a supporter in Constantius' wife, Eusabia, who came to Julian's defense. Julian was, after all, Constantius' last surviving relative. He never had a son of his own though his second wife had a daughter after Constantius' death. Constantius took his time making a decision. There were some who insisted Julian was dangerous. Yet he finally decided that Julian should become Caesar in his own right. Constantius also presented Julian a wife, the much older Helena, who was also Constantius' sister. Julian and Helena were never close until near the end of her life. Helena miscarried and delivered a child who died shortly after childbirth. It wasn't until near the end of Helena's life that she told Julian that Eusabia had caused the deaths of their children. Julian's own troops called for him to accept the title, Augustus. Julian carefully staged the event so that it appeared he had no choice but to accept or die. To Constantius, he continued to pledge his loyalty, though he began attempts to amass the army necessary to overthrow his cousin. Julian had several outstanding victories on the battlefield, and Constantius took credit for them. As it turned out, the two men never faced each other in battle.

Constantius died, leaving Julian to rule. Julian spent the majority of his life discrediting Christianity. Though he didn't often openly disdain the religious practices of the day, he prayed often to Apollo, god of the sun. Julian died in battle, the victim of a spear thrown by his own body guard, Callistus, who claimed to have committed the act in an effort to protect Christianity from Julian. Callistus grew rich from payment for his action. Julian did not name an heir to the throne.