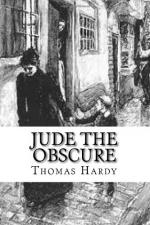 Thomas Hardy
This Study Guide consists of approximately 43 pages of chapter summaries, quotes, character analysis, themes, and more - everything you need to sharpen your knowledge of Jude the Obscure.

This detailed literature summary also contains Topics for Discussion and a Free Quiz on Jude the Obscure by Thomas Hardy.

Jude the Obscure is the final novel written by novelist Thomas Hardy. This novel is the story of Jude Fawley, a young man who craves education like others might crave food or drink. Jude decides he wants to go to university and he works toward that goal until at the age of nineteen he is sidelined when the girl he has been courting tells him she is pregnant. Jude marries this girl, but, the pregnancy having been a lie to trap him, the marriage quickly fails and the girl leaves. Jude moves to the university town a short time later and meets his soul mate in his cousin, Sue Bridehead. However, Sue refuses to love him and instead marries another. In time, Sue comes back to Jude, but tragedy steals her away once more. Jude the Obscure is a novel of tragedy, of the war between a man's desires, and of the world he lives in.

Jude Fawley is told by the departing school teacher in his tiny village that education is the only way a man can improve himself Unhappy in his situation and his life, Jude focuses on learning. He begins with some grammar books in Latin and Greek from his old teacher and teaches himself to read these languages. There is a town not far from Jude's small village where there are multiple universities. Jude decides he would like to move there to attend classes, but realizes he must learn a trade so that he might be able to pay for his living there. Jude becomes apprenticed to a stonemason.

As Jude works toward his goal, he is forced to walk the long road between his village and a nearby town twice a week. One afternoon, while making this walk Jude meets a young woman named Arabella. This girl likes Jude's looks and decides she will make him her husband. Arabella seduces Jude and then tells him that she is pregnant even though she knows she is not. Jude marries Arabella, but when he learns the truth about her pregnancy, they begin to argue. Finally Arabella leaves, choosing to move to Australia with her family.

Several years later Jude decides he has saved enough money and he moves to his beloved university town of Christminster. Although more fascinated with the universities than before, Jude focuses on finding a job first. At the same time, Jude has learned of a cousin who lives in Christminster and he seeks her out. Jude does not speak to Sue Bridehead at first, but watches her from a distance because he is enamored of her beauty. In time, however, Sue learns that he is in the city and she seeks him out. They become friends, but when Jude learns she is to go to London because she has had a falling out with her landlady and employer, Jude convinces his old schoolteacher to take her in as a student teacher.

As Jude and Sue become closer friends, Jude turns his attentions to entering one of the universities. Unfortunately the universities are very expensive and they have no program to make the accessible to the working poor. Jude writes to the headmasters of several of the schools, but he only receives on reply that recommends he continue on his current path of stone work. Deeply depressed by this, Jude gets drunk and shows up at Sue's house. Embarrassed the following morning, Jude goes home to his home village.

Sue writes to Jude and tells him that she is going to another village where she will attend a teachers college. Jude moves there to be close to her, but a misadventure on a day out causes the leaders at the school to believe Sue is without moral conscience. Sue is punished, so she runs away. Now Sue has been deemed immoral and banned from the school. Sue feels that she should marry to spare her reputation, but Jude tells her that he is already married. For this reason, Sue marries the old schoolteacher, Robert Phillotson. Jude is heartbroken and returns to Christminster. However, a short time later Sue convinces Phillotson that it would be the moral thing to do in letting her go to live with her lover.

At first Sue and Jude live without intimacy. However, when Arabella comes back into Jude's life and tells him that they have a son whom Jude must take custody of, Sue becomes jealous and assents to becoming Jude's lover. However, she thrice refuses to marry him. Several years later they have two children and a third is expected. They move back to Christminster after several years on the road because Jude has become ill. The move is made difficult when they cannot find lodging due to the children. For this reason, Jude's child with Arabella decides to take the children out of the equation by hanging himself and his two younger siblings. The stress of this tragedy causes Sue to deliver a premature infant who also dies.

Sue turns to the church for solace and realizes that she has been punished for living in sin with Jude. Sue leaves Jude and returns to Phillotson, remarrying him. Jude begins to drink and this leads to Arabella tricking him into marriage. Jude goes to Sue and begs her to run away, but she refuses. Sue then gives herself to Phillotson as his lover. Jude dies a short time later.

More summaries and resources for teaching or studying Jude the Obscure.