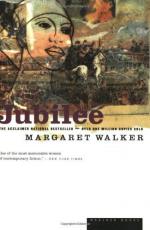 Margaret Walker
This Study Guide consists of approximately 36 pages of chapter summaries, quotes, character analysis, themes, and more - everything you need to sharpen your knowledge of Jubilee.

Vyrie is just a toddler when she's taken to the slave quarters at Shady Oaks where her mother, Hetta, lies dying in childbirth. Vyrie is the daughter of the plantation owner, John Dutton, but is a slave because her mother is a slave. Soon after Hetta's death, Aunt Sukey - the slave who tends many of the young slaves on the plantation - dies as well. Vyrie is taken into the house but the cruelty of the mistress, who is aware of Vyrie's parentage, prompts John to send Vyrie to the kitchen where she helps the cook, Aunt Sally. When the mistress of the house insists that Aunt Sally be sold away, Vyrie is eventually chosen as her successor. Stories of impending war circulate carefully among the slaves. One of those active in the Underground Railroad is Randall Ware, a free black man who owns a blacksmith shop near Shady Oaks. Randall is immediately taken with Vyrie and promises to buy her freedom if she'll marry him. John denies her permission to marry Randall Ware and refuses to sell her when Randall sends a white agent to an auction at Shady Oaks. But Vyrie and Randall marry in secret and have three children together, two of which survive infancy.

Vyrie remains at Shady Oaks throughout the Civil War and is there the day a Union commander informs the slaves that they are now free. By this time she hasn't seen Randall Ware for many years and when a man named Innis Brown remains at the plantation, helping Vyrie to raise food, Vyrie gives in to his request that they marry. When Randall Ware does return, he discovers that Vyrie has gone. Randall takes up his old life as a blacksmith but is attacked by the Ku Klux Klan because he doesn't want to sell his land. His assistant is murdered and Randall beaten brutally before he gives in.

Vyrie and Innis make a home for themselves but find their first choice of land is prone to flooding. The next is a sharecropper's farm with a crooked landowner and they are happy in their next home until the Ku Klux Klan burns them out. They have settled in again but Vyrie is fearful of the hatred she senses in her neighbors until she helps with the birth of a child and is lauded as the community's midwife. When Innis and Vyrie's teenaged son Jim clash, it seems Jim will leave home in anger but Randall Ware learns from a mutual friend where Vyrie has settled. Randall shows up with the intention of taking Jim to a school newly established to train teachers for black communities. Vyrie knows this will be the best solution for Jim though she dreads letting him go. Innis fears Vyrie will leave him in favor of Randall Ware but Vyrie is pregnant with their third child and knows that she'll remain in the home she's helped build.

More summaries and resources for teaching or studying Jubilee.