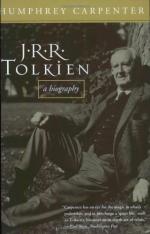 This detailed literature summary also contains Topics for Discussion and a Free Quiz on J. R. R. Tolkien: A Biography by Humphrey Carpenter.

"J.R.R. Tolkien: A Biography" by Humphrey Carpenter is a biography of the well known author of the classic tales "The Hobbit" and "The Lord of the Rings."

John Ronald Reuel Tolkien was born in 1892 in Bloemfontein, South Africa, where his father, Arthur Tolkien, worked in the banking industry. Tolkien, who was called Ronald, spent his first five years in South Africa before returning to England to visit family. While in England, Arthur Tolkien died and the family, now under the care of Tolkien's mother, Mabel Suffield Tolkien, stayed in England.

Tolkien and his younger brother, Hilary, grew up living in several different houses, from the English countryside to more than one dismal house in the city. Mabel was insistent on teaching the boys religion, language, and other important subjects until they could attend school. It was during this time that Tolkien developed a deep and abiding love for languages.

Mabel Tolkien died from diabetes when Ronald was thirteen and Hilary was ten. The boys were left under the guardianship of Father Francis Morgan the family's priest and dear friend. Father Francis would continue to play a very important role in the boys' lives although they did not live with him.

The Tolkiens excelled in school, although Hilary was known as a bit "dreamy," which often got him into trouble. Ronald continued to study languages and eventually spoke many fluently, including Latin, Greek, German, French, Norse, Welsh, Middle English, Chaucerian English, and Icelandic. The love of these languages was what would cause Tolkien to create his own elvish languages, starting in boyhood.

Tolkien loved school and met many friends, some of whom would be there for the rest of his life. Shortly after graduating from King Edward's School, Ronald met Edith Bratt, a 19 year old orphan who lived in the same boarding house. Although there was a three year age difference and much scandal about the pair being seen together, Ronald would eventually marry Edith. The Tolkiens would have four children and a solid home.

Tolkien was blissful when he was granted a scholarship to Oxford. The years Tolkien spent at Oxford were the most enlightened and joyous of his life. Several years later, it wasn't a surprise to anyone that Tolkien would return to Oxford as a member of the faculty, where he would excel into a high ranking professorship.

Throughout Tolkien's entire life, he created and wrote. The impetus for his great English epic had been with him for a long time. It wasn't until one of his closest friends had died that Tolkien put pen to paper. The process saw the completion of "The Hobbit," "The Lord of the Rings," "The Silmarillion," and many other works throughout Tolkien's long and successful life.

Tolkien's books may be more popular now than ever, thanks to the devotion of generations of fans, academicians, friends, and critics.