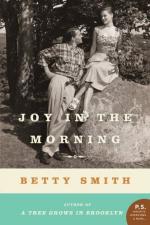 Betty Smith
This Study Guide consists of approximately 26 pages of chapter summaries, quotes, character analysis, themes, and more - everything you need to sharpen your knowledge of Joy in the Morning.

Joy in the Morning Summary & Study Guide includes comprehensive information and analysis to help you understand the book. This study guide contains the following sections:

This detailed literature summary also contains Topics for Discussion and a Free Quiz on Joy in the Morning by Betty Smith.

The reader first meets Annie McGairy and Carl Brown as they prepare to marry soon after Annie arrives in the Midwest from Brooklyn, New York. Due to Annie's youthful appearance, the authorities attempt to delay the marriage because Annie fails to produce permission from her parents to marry. Finally, though, she produces her birth certificate, and the justice of the peace performs the ceremony, assuming that Annie carries Carl's child already.

Soon, Carl and Annie set up household in a boarding house near the university where Carl studies law. Though they live on a modest income, it feels extravagant to these two young people that never before made their own decisions. Gleefully, they write the news to their parents, none of whom respond with support. Undaunted, Carl and Annie continue their new life together.

At first, it appears that the Dean of the college will expel Carl because of the marriage, but, ultimately, Dean Darwent becomes a staunch supporter of Carl's education, making suggestions for work that will both support his small family and allow him to continue his studies.

Carl and Annie make several adjustments to their new marriage and their new surroundings. Annie, especially, appears enamored with college life. She begins by taking books out of the library, which she reads passionately. Then, she begins eavesdropping on classes. Dean Darwent finds out and invites her to audit some classes on writing, at which she excels.

At the beginning of the year 1929, however, a new and difficult struggle appears in Annie's life—a pregnancy. A first, she hides it from Carl for the sake of his studies. When he finds out, he despairs for his education, but, once again, Dean Darwent offers suggestions to allow Carl to continue. He attends summer school to ease his fall load of classes.

Also, The Browns receive the chance to live rent free, in a caretaker's cottage on the field of the local high school. Carl also takes night work in a lampshade factory. Now living in the town of Lopin, Annie makes new friends, who help her with her new responsibilities as a mother. The newest and direr hardships occur during Annie's pregnancy, but their dedication to one another prevails each time.

The baby arrives at the beginning of Carl's final year in law school. Soon after, Carl graduates from law school. Despite the struggles they faced, the family seems to be prepared for a bright future.

More summaries and resources for teaching or studying Joy in the Morning.

Joy in the Morning from BookRags. (c)2022 BookRags, Inc. All rights reserved.