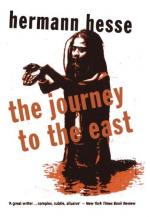 Hermann Hesse
This Study Guide consists of approximately 39 pages of chapter summaries, quotes, character analysis, themes, and more - everything you need to sharpen your knowledge of Journey to the East.

Journey to the East Summary & Study Guide includes comprehensive information and analysis to help you understand the book. This study guide contains the following sections:

This detailed literature summary also contains Topics for Discussion and a Free Quiz on Journey to the East by Hermann Hesse.

'The Journey to the East" is a mystical novel telling of a strange secret league of artists, philosophers, writers, and others that transcends time and space, and is engaged in a meandering "journey" that seems to have no concrete destination. The narrator of the tale is H.H., a member of the league who starts out on this journey with a group of other members, but eventually departs from the group after becoming disillusioned. Many years later, he rediscovers the League and attempts to rejoin it. He is brought before a court of League members and confronted with his transgressions for deserting the League on the Journey. He is taken back into the League and shown the secret of his own place within it.

The novel opens with the narrator, H.H., declaring his intention to describe the fantastic Journey undertaken by the League. He has vowed not to reveal anything about the League itself, he explains, but is allowed to reveal his own personal experiences in connection with it. This restriction will present difficulties, he explains, which may make the whole story incomprehensible to the reader.

After being initiated into the League, H.H., and a group of other members set off on the "Journey to the East". Their path is not a definite one, and they often stop at churches and graves and other sites to pray and linger. Along the way, they meet up with other groups of League members also on the Journey. Their paths coincide sometimes, but they all move independently of one another in different directions. The Journey moves through time as well as space, and the other League members are figures both contemporary and historical, real and fictional.

Traveling with H.H.'s group is a man called Leo, whom he describes as a servant. Leo always seems to have exactly the item the party needs, even though, like the rest of them, he carried only a small pack. He is a genial and helpful servant, but he suddenly disappears from the party. His disappearance puzzles the other members, and they soon begin to imagine that Leo has taken with him many of the useful items they need. Most of these items turn up later, but the confusion at the time leads to arguing among the party members. Among the most important things that seem to be missing is a document outlining the founding of the League. H.H. is convinced that Leo has taken this irreplaceable document. Others argue that other copies and translations exist. Some think that the original document was burned. This dispute eventually leads to the disbanding of the party as each member goes his own way.

Several years later, as H.H. sets out to recount the story of this Journey, he finds he is fixated on the disappearance of Leo and cannot move past it in his story. He resolves to find Leo, which he does with the help of a friend. Leo does not seem to recognize him, but is pleasant to him. H.H. pleads with him to try to remember him and the Journey. Leo responds that he is still on the Journey, but does not fully recognize H.H.

Despondent, H.H. returns to his room. He writes a long letter to Leo, explaining his need to reconnect with the League and the Journey. When he awakes the next day, Leo is in his apartment. He has been sent by the League.

Leo takes H.H. by a circuitous route to the headquarters of the League. There, in the archives, he appears before a court of League members to answer for his self-accusations of infidelity to the League. At the head of the court sits Leo, who is also the president of the League. His abandonment of the group earlier had been a test, one that H.H. and the rest of his group failed. The despair that haunts H.H. for years afterward is also part of the test, H.H. learns. He is acquitted and allowed to continue writing his account of the League. He is given full access to the archives, which have a file on every member and all the exploits of the League over the centuries. He begins to search through the archives, eventually finding the entry about himself. His entry consists of a curtained area containing a surreal statue that appears to be of himself melting into the form of Leo. He suddenly feels very tired.

More summaries and resources for teaching or studying Journey to the East.

Journey to the East from BookRags. (c)2022 BookRags, Inc. All rights reserved.