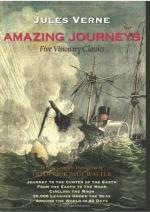 Journey to the Center of the Earth Summary & Study Guide

Jules Verne
This Study Guide consists of approximately 46 pages of chapter summaries, quotes, character analysis, themes, and more - everything you need to sharpen your knowledge of Journey to the Center of the Earth.

Journey to the Center of the Earth Summary & Study Guide Description

Journey to the Center of the Earth Summary & Study Guide includes comprehensive information and analysis to help you understand the book. This study guide contains the following sections:

This detailed literature summary also contains Quotes and a Free Quiz on Journey to the Center of the Earth by Jules Verne.

“Journey to the Center of the Earth” is a classic science fiction novel by Jules Verne. A German mineralogist Otto Lidenbrock, his nephew Axel, and their guide Hans descend into the subterranean world beneath the earth’s crust. When the novel begins, Otto is a well-respected, but uncelebrated, middle-aged professor in Hamburg, Germany. He is caring for Axel and a female ward named Grauben. Otto comes to discover the Saknussemm manuscript in an old quarto volume of Icelandic history from centuries before. Its purpose is to disclose the location of a way to reach the center of the earth. Immediately, Otto decides to take up the challenge, with Axel being involuntarily included on the expedition. Grauben encourages Axel to go on the journey. She thinks that the expedition will help him to mature and become a man. Then, when he returns, she can marry him. Axel reluctantly joins his uncle on a journey to Iceland.

In Iceland, Otto and Axel hire a local duck hunter named Hans to serve as a guide and provide manpower for the expedition. Following the manuscript directions, the three-man team climbs Snafell, an extinct volcano, ropes down inside, and then proceeds to follow a network of tunnels and caverns. The walls are lined with thousands of fossils, and the floors are covered in the bones and debris of ancient animals. Eventually, the three emerge into a massive underground cavern-like space, thousands of feet high. Its width is unknown. Here, they discover a great sea, distant mountains, ancient forests, roaming mastodons, blind fish, ocean-going dinosaurs, and the perfectly-preserved, naturally-mummified remains of a prehistoric man. The team has reached the center of the earth which Saknussemm claimed could be found in his manuscript.

When Axel, Otto, and Hans attempt to blast their way through yet another passageway with explosives in order to continue their discoveries, a great chasm opens up. They are swept into an active volcano and ejected off the coast of Italy. The three return to Hamburg triumphantly, where some do and some don’t believe the stories that Otto tells. He becomes even more widely respected and celebrated. Otto donates the Saknussemm manuscript to the city archives. Hans later returns home to Iceland, for he is homesick. Graubem tells Axel he is now a hero, and she marries him. At the close of the novel, the two decide to continue to live and study with Otto.

More summaries and resources for teaching or studying Journey to the Center of the Earth.

Journey to the Center of the Earth from BookRags. (c)2022 BookRags, Inc. All rights reserved.