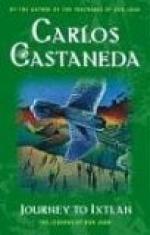 Carlos Castaneda
This Study Guide consists of approximately 56 pages of chapter summaries, quotes, character analysis, themes, and more - everything you need to sharpen your knowledge of Journey to Ixtlan.

Journey to Ixtlan: The Lessons of Don Juan Summary & Study Guide includes comprehensive information and analysis to help you understand the book. This study guide contains the following sections:

This detailed literature summary also contains Topics for Discussion and a Free Quiz on Journey to Ixtlan: The Lessons of Don Juan by Carlos Castaneda.

Carlos Castaneda is an anthropology student seeking information from a Yaqui Indian sorcerer named Don Juan Matus in order to research psychotropic plants. The author's objective becomes sidelined by Don Juan, who avoids all discussion of plants. In this, Castaneda's third book on lessons from a 'man of knowledge,' Don Juan's mysterious but charismatic persona takes Castaneda under his wing. From December, 1960 to May, 1971, Castaneda becomes his reluctant sorcerer's apprentice. The Indian is determined to show Castaneda entry into an alternative reality akin to that reached through peyote.

The introduction clarifies the premise of Journey to Ixtlan, which Castaneda explains, as a more concrete and permanent road to the temporary experience of ingesting psychedelic plants such as peyote. Castaneda immediately gives us a glimpse of Don Juan's intimidating wisdom by referring to his piercing glance. In effect each successive chapter is a step of Castaneda's apprenticeship. Whether Castaneda understands Don Juan or not is another matter. The Yaqui Indian reads Castaneda's mind at every turn. His demonstrations of power are always followed by the author's patterned reaction of awe, confusion, lack of understanding and rational argumentation. Although Castaneda is afraid of what Don Juan does to him, he feels compelled to come back for more, and a genuine friendship develops between the two. Clearly the old man is fond of and has great hopes for Castaneda.

To Castaneda, the concepts and behaviors Don Juan proposes contradict "normality" and are often difficult and embarrassing to implement. Don Juan insists, for instance, that Castaneda talk to plants in a loud clear voice and sends him off to practice. The Indian recommend to Castaneda that he get rid of his "personal history" and "create a fog" around himself, in order to make himself not so obvious to others. This goes along with his later premise that he become "inaccessible." Don Juan contends Castaneda lost the love of his life because he was boring, predictable and always there, even as Castaneda argues that his routines are less common than most people's.

Castaneda tends to contradict the Indian with logic he has been brought up with, contending that the changes Don Juan suggests are impractical to his life. Yet Don Juan identifies and highlights aspects of Castaneda's psyche through difficult tasks and trials he puts his unwitting apprentice through. At one point, he alerts Castaneda that his death is always to his left, and that he should not forget this. Frightened, Castaneda argues that he doesn't want to think about death. Don Juan retorts that we are all going to die and should think about it. The reality that Don Juan wishes to impart to Castaneda is always smacking the author in the face with sense and great truth, but Castaneda claims not to understand and attempts to explain the supernatural he witnesses away with logic. In essence, Don Juan asserts that one has to evade logic in order to be happy.

In spite of his stubbornness, Castaneda experiences much euphoria and accomplishes most every technique Don Juan teaches him. It takes Castaneda a long time to finally "see," Don Juan's contentions that he is no more important than any other plant or creature. He sends him on his own to the mountains and all that Don Juan has taught him comes into play. He speaks to a magical coyote and realizes his equality with everything in nature. He understands that it is a mysterious world we reside in as don Juan contends. Castaneda "stops the world," as Don Juan has prepped him, but he realizes he is not yet ready to take the next step of an eternal journey from which he can never return.

More summaries and resources for teaching or studying Journey to Ixtlan: The Lessons of Don Juan.

Journey to Ixtlan: The Lessons of Don Juan from BookRags. (c)2022 BookRags, Inc. All rights reserved.