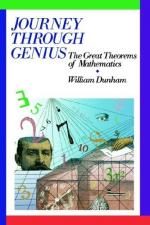 Journey Through Genius: The Great Theorems of Mathematics Summary & Study Guide includes comprehensive information and analysis to help you understand the book. This study guide contains the following sections:

This detailed literature summary also contains Topics for Discussion and a Free Quiz on Journey Through Genius: The Great Theorems of Mathematics by William Dunham (mathematician).

Journey Through Genius: The Great Theorems of Mathematics is a survey of twelve great theorems selected by author William Dunham for the importance to the field of mathematics as well as for how they represent the prevailing ideas and ideals of the times in which they appear.

Dunham takes a chronological path through the subject, beginning with the ancient Greeks and the thinkers centered in Alexandria, the site of the greatest collection of learning in the ancient world. Beginning with Hippocrates of Chios, Dunham introduces Euclid, whose geometry text is still taught today, Archimedes, the absent-minded inventor and thinker who accurately estimates the value of π, and Heron, who furthers the analysis of the triangle. These three mathematicians have an impact so great nobody approaches their advances for many centuries.

Dunham picks up the thread in the 16th century with the eccentric and superstitious Gerolamo Cardano who is jailed for heresy at one point but manages to solve equations once thought unsolvable. He pays homage to the great Isaac Newton and his elegant estimation of π. He describes the contentious Bernoulli brothers, Johann and Jakob, who despite their bickering manage to transform the mathematics of their day. Dunham is especially reverent toward Leonhard Euler and Georg Cantor, two incredibly prolific mathematicians who push the boundaries of theoretical math despite physical and mental challenges.

In each chapter, Dunham presents the proof of a "great theorem" by the subject of the chapter surrounded by introductory biographical and historical background to place the theorem in context, as well as an epilogue describing how the great theorem is received and the importance it holds for subsequent thinkers. Dunham's demonstrations are thorough and require careful attention, but do not rely on any advanced knowledge of mathematics to comprehend. Rather than drill the math, Dunham wishes to present the theorems in a setting that enhances their historical importance and it is not necessary to completely comprehend each theorem to grasp their influence.

Dunham also charts the metaphysical aspects of mathematics through the centuries, from the Pythagorean idea that the natural world can be measured in whole units of fixed proportions to Georg Cantor's religious notions about God's role in his exploration of the infinite. He describes the reluctance of mathematicians to divulge their discoveries, sometimes out of fear of having their precious assets taken from them, but also sometimes because of a fear that some more theoretical ideas might not be accepted among their colleagues. Dunham ably describes how theoretical math is often at the forefront, and how ideas that seem too bizarre to publish in one era come to have practical significance in another once science and technology have caught up.

Journey Through Genius: The Great Theorems of Mathematics from BookRags. (c)2022 BookRags, Inc. All rights reserved.