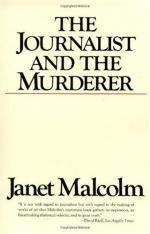 The Journalist and the Murderer Summary & Study Guide

Janet Malcolm
This Study Guide consists of approximately 31 pages of chapter summaries, quotes, character analysis, themes, and more - everything you need to sharpen your knowledge of The Journalist and the Murderer.

The Journalist and the Murderer Summary & Study Guide Description

The Journalist and the Murderer Summary & Study Guide includes comprehensive information and analysis to help you understand the book. This study guide contains the following sections:

This detailed literature summary also contains Topics for Discussion on The Journalist and the Murderer by Janet Malcolm.

Jeffrey MacDonald contacted Joe McGinniss during his murder trial to offer McGinniss the opportunity to write a book about him. Assuming McGinniss would find him innocent and write his book in support of this idea, MacDonald allowed McGinniss to become a part of his defense team and become a part of his everyday life. MacDonald and McGinniss were always in each other’s company during the trial, talking and drinking or going for their morning runs on the beach. The two became friends, or so MacDonald thought, until the release of McGinniss’s book, Fatal Vision. With the release of this book, MacDonald realized that McGinniss thought he was guilty and had been lying to him for several years. McGinniss had been presenting himself as MacDonald’s buddy throughout the trial and during his incarceration. He communicated with MacDonald through letters for four years and not once during that time did he ever suggest that he thought MacDonald was anything other than innocent. In fact, McGinniss’s letters expressed his distress and regret at MacDonald’s sentence in emotional and forceful terms.

After the publication of Fatal Vision, MacDonald sued McGinniss for compromising the “essential integrity” of his life through his book. MacDonald and McGinniss eventually settled because a mistrial was declared. However, if it hadn’t been for one holdout juror, MacDonald would have won. Malcolm’s interest was piqued by the fact that a man convicted for a horrendous crime, the brutal slaughtering of his wife and children, was able to sue a journalist for essentially compromising his identity and dignity. So Malcolm decided to investigate the people and events involved in the two trials and she discovered many things about human nature. She is open about the morally unstable relationship between a journalist and his subject but she reveals McGinniss went far beyond the necessary role of sympathetic listener. She reveals McGinniss took every opportunity to deceive MacDonald and pretend to be his best friend. Thus, it is far more understandable the jury was going to side with MacDonald. Malcolm asserts that although he was convicted of a brutal crime, the jury in his lawsuit against McGinniss ignored that fact because he was punished for his crime. Instead, they focused on the fact McGinniss had won MacDonald’s trust and then betrayed his confidence. McGinniss had been a false friend and in the jury’s eyes, this was a heinous crime that could not be justified by MacDonald’s status as a murderer.

The Journalist and the Murderer examines the concepts of truth and fiction and right and wrong within the framework of Malcolm’s investigation into these two people and trials. Malcolm also examines the relationship between the subject and the writer. While she asserts the relationship is inherently imbalanced, with the journalist having the majority of the power, she maintains the journalist has an ethical obligation to a subject. The subject is psychologically predisposed to tell his story to whomever will listen. He sees the journalist as an authority figure and someone who is interested in him and so he feels a kind of comfort that may sometimes lead him to reveal too much. Because of his power, the journalist should be extremely careful never to present himself in a false light or mislead his subject, especially because a close relationship can easily develop between a journalist and a subject during the interview process. The journalist must always be careful to maintain a professional distance.

The conclusion of Malcolm’s investigation makes it clear there is a very fine line between presenting yourself as a sympathetic listener and pretending to be a friend. Malcolm never provides any conclusive proof or opinion regarding the guilt or innocence of Jeffrey MacDonald. The opinions and assertions of the people Malcolm interviews are never supported or finally proven. The only absolute she does assert at the end of the narrative is the absolute of ethical journalism. Malcolm provides no clear definition of ethics, but she does hold the ethics of journalism cannot be situational or gratuitous. Journalists are given a great amount of power, they provide the news and shape the world’s understanding of itself, and it is extremely important they hold to a certain code of ethics regardless of their subjects or circumstances.

More summaries and resources for teaching or studying The Journalist and the Murderer.

The Journalist and the Murderer from BookRags. (c)2022 BookRags, Inc. All rights reserved.