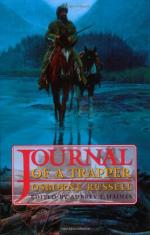 Osborne Russell's Journal of a Trapper: Edited from the Original… Summary & Study Guide

Osborne Russell
This Study Guide consists of approximately 32 pages of chapter summaries, quotes, character analysis, themes, and more - everything you need to sharpen your knowledge of Osborne Russell's Journal of a Trapper.

Osborne Russell's Journal of a Trapper: Edited from the Original Summary & Study Guide includes comprehensive information and analysis to help you understand the book. This study guide contains the following sections:

This detailed literature summary also contains Topics for Discussion and a Free Quiz on Osborne Russell's Journal of a Trapper: Edited from the Original by Osborne Russell.

Osborne Russell's narrative takes place in the years 1834 to 1843, when he travels and traps beaver in the northern area of the Rocky Mountains. Much of the area, including the famous natural springs and geysers is presently in Yellowstone National Park. Russell at age 20 signs up for Wyeth's expedition to the Rocky Mountains, with the Columbia Fishing and Trading Co., leaving from Missouri. The overland party arrives for the yearly rendezvous in July of 1834. Mr. Wyeth builds Fort Hall on the Snake River to trade for beaver skins, which is where Russell begins his service. In the beginning, Russell has to learn how to trap beaver and kill the wild game of the area, from buffalo to grizzly bears. Russell meets friendly Snake Indians and soon learns much of their language. Russell hears about Indians, mostly Blackfeet that attack white trappers.

Russell becomes a free trapper who operates with other trappers from Ft. Hall. In June of 1835, there is a skirmish with Blackfeet Indians near the Teton Mountains. Russell meets many friendly Indians who help him in his travels. For the first time, he sees the hot springs of the Yellowstone Lake area. Russell spends some time alone on a mission and is feared dead before he appears again at Ft. Hall. Yellowstone Lake and the surrounding springs becomes a favorite place to hunt and trap for Russell and the men with James Bridger. It also is a favorite hunting ground of the Blackfeet Indians and skirmishes develop on a regular basis. During the wintertime often things are quiet, and Russell has time at his "Rocky Mountains College." Other favorite spots of Russell and other trappers are Jackson Lake, Jackson's Hole (Valley) and the Snake, Bear, Big Horn and Wind Rivers and tributaries. Russell ranges in his travels from 25-Yard River in the north, to Utah Lake and the Great Salt Lake in the south.

Later, a hostile Indian village approaches and a series of battles with the Indians occur. Russell is sent with three other men on a mission, and they are robbed by Crow Indians. Despite the apologizes of the Crow Chief several days later, Russell and his comrades refuse to trust the Chief, and they proceed on foot for a long period before making it to Fort William. Russell is humiliated because he has lost his goods and horses but soon gets most of his property back. Russell is attacked on another journey while with one comrade and is injured and loses his horse. He depends on the friendship of other trappers and Indians to survive and reequip. Each year, parties from the Eastern United States or the mouth of the Columbia River bring supplies to the trappers and buy beaver skins from them. Russell spends many months trapping with Elbridge Trask in the area around Gray's River, till he decides to leave his life as a trapper. Russell joins a group going to a new town on the Willamette River. There he is injured in an accident and loses his right eye.

More summaries and resources for teaching or studying Osborne Russell's Journal of a Trapper: Edited from the Original.

Osborne Russell's Journal of a Trapper: Edited from the Original… from BookRags. (c)2022 BookRags, Inc. All rights reserved.