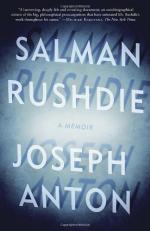 Joseph Anton: A Memoir is the autobiographical account of Salman Rushdie after a fatwa is issued against him for his authorship of The Satanic Verses.

Salman Rushdie, a native of British India, is educated in England at Exeter University, and goes on to become a writer. His first hit is a book called Midnight's Children, which brings him success and fame. His next book, The Satanic Verses, incorporates Islamic theology, and is roundly criticized by many Muslims around the world. The book is condemned, and a fatwa is issued against Rushdie, calling for his death. The book is burned, and lives of everyone associated with publication are threatened, and some are even killed. Rushdie and his second wife, Marianne, are taken into protective custody, and spend the next year moving around from one safe house to another.

Rushdie's life is threatened again and again, and each year, the fatwa against him is renewed. Nevertheless, Rushdie continues writing, and his friends rally around him. Many in the literary world do the same, but many others, under fear, abandon and condemn Rushdie. For the next decade, Rushdie lives under protection, divorcing, marrying, divorcing again, and falling in love once more. Rushdie also manages to raise his son, Zafar, into a competent young man, and begins raising his new baby, Milan. The autobiography ends with the threat against Rushdie minimized, and Rushdie ends his protection. He then goes to hail a cab to see about an apartment.