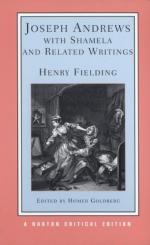 Henry Fielding
This Study Guide consists of approximately 39 pages of chapter summaries, quotes, character analysis, themes, and more - everything you need to sharpen your knowledge of Joseph Andrews ; with Shamela ; and Related Writings.

This detailed literature summary also contains Topics for Discussion and a Free Quiz on Joseph Andrews ; with Shamela ; and Related Writings: Authoritative Texts, Backgrounds and Sources, Criticism by Henry Fielding.

"Joseph Andrews with Shamela and Related Writings" by Henry Fielding and edited by Homer Goldberg is a collection of works by Henry Fielding, works that inspired Fielding and works that were written about Fielding's writing. This collection includes copies of two of Fielding's most famed narrative works, as well as several of his essays. Additionally, this collection includes selections from sources that influenced his writing and criticism about his works.

"Joseph Andrews" is a novel in which Joseph Andrews, the young male protagonist, is pursued by Lady Booby, his employer. After being dismissed from her service for refusing her advances, Joseph travels from London to the Booby country home. On the way, he endures many misadventures but is reunited with the kind Parson Adams and Joseph's love, Fanny Goodwill. Upon his return to the country, Lady Booby tries to separate Joseph and Fanny, and her ends nearly succeed when a peddler reveals that Fanny's parents are Mr. and Mrs. Andrews; however, after Mr. Wilson is revealed to be Joseph's biological father, Joseph and Fanny are married.

In "Shamela", Shamela writes her mother about her attempts to seduce her employer, Mr. Booby. Shamela feigns innocence and virtues, acting appalled by Mr. Booby's attempts to seduce her. Eventually, Mr. Booby marries Shamela, but he is cuckolded when he finds her in bed with Parson Williams. "Essay on Reputation" claims it is hard to distinguish virtue from vice because vice is industrious with disguise. "Essay on Good Nature" states that good nature delights in man's happiness while ill nature fetters and harasses mankind. "The Apology for the Clergy" describes good men and says that clergymen who are not good men are worthy of contempt. In "An Essay on the Knowledge of the Characters of Men", many show depravity, but few champion the innocent. Fielding warns against those who hide their true vicious natures. In "Preface to the Adventures of David Simple", Fielding claims that David Simple is the perfect example of a comic Epic poem because it incorporates the amiable, the ridiculous and the natural.