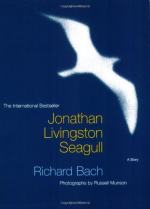 Richard Bach
This Study Guide consists of approximately 33 pages of chapter summaries, quotes, character analysis, themes, and more - everything you need to sharpen your knowledge of Jonathan Livingston Seagull.

The area where the Council Flock deliberates and condemns Jonathan to exile for his experiments in aerodynamics is called the Council Beath. On this beach, Jonathan, returned from heaven to gather and teach Outlaw disciples, vindicates his teachings and begins proclaiming his message of the gulls' freedom to be more than the rulers allow them to be.

The governing body of the seagull Flock, the unchallengeable Council Flock condemns Jonathan for reckless irresponsibility and violating the dignity and tradition of the Gull Family after his historic aeronautic flight. It exiles the new Outcast to the Far Cliffs.

The traditional place of exile for Outcasts from the Flock, the Far Cliffs lie west of Council Beach and are where Jonathan gathers his first six followers.

The offshore waters where the Flock mass at meal times to scavenge...