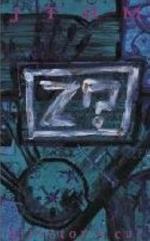 Jhonen Vasquez
This Study Guide consists of approximately 40 pages of chapter summaries, quotes, character analysis, themes, and more - everything you need to sharpen your knowledge of Johnny the Homicidal Maniac.

This detailed literature summary also contains Topics for Discussion and a Free Quiz on Johnny the Homicidal Maniac: Director's Cut by Jhonen Vasquez.

Johnny the Homicidal Manic, by Jhonen Vasquez, is a graphic novel about a young adult's decent into madness. Johnny is a troubled young man with few friends and no real recollection of his past. He hears voices that seem to come from various inanimate objects around his home, such as a rabbit he killed and Styrofoam animals. He is often made fun of, and as a result, he slowly desires revenge against those who persecute him. He is filled with sadness as the words of those around him hurt him, and as he sees those same individuals free of pain. He kills them, after torturing them, in order to keep their blood, so that he can paint his wall. He is certain there is a monster behind the wall, and that to keep the monster at bay he must keep the wall wet with blood at all times. Johnny's neighbor, little Todd, knows of Johnny's murder, since Johnny saved Todd from a child molester at the mall, and Todd watched as Johnny killed him. Todd, however, is also on his way to dysfunction as his family ignores him, his father treats him horribly, and as he witnesses Johnny's crimes. Johnny, after a deep depression, decides to commit suicide. He is almost convinced not to do so, but forgets he has a gun triggered to the phone, and he is killed when he answers. Johnny first travels to heaven, where the angels are sickened by his actions, and where he learns he is not to go to heaven. Johnny incites a riot in heaven, and is immediately sent to hell. Satan informs Johnny he is a waste-plug, and that he cannot be killed or harmed in life, since his role is to take the waste humanity spews and keep it inside to protect the rest of humanity. On his return, Johnny decides to become cold and unfeeling, since his destiny requires him to be abused. The creature in his wall, which turns out to be real, escapes and eats several of his hostages, and little Todd dreams of the animal.

The story of Johnny is one of teenage rage, anger against the world, and a mentally insane individual whose life consists of trying to find peace through violence. His happiness, although rare, causes him to spiral into despair and kill those closest to him. The voices in his head keep him miserable, while his own psyche makes him a slave to his desires. It is only when he dies and discovers his purpose that he is able to free himself from his misery. While Vasquez notes in the beginning of the novel his goal is not provide social commentary, his work truly does speak volumes about the damage humans do to one another, and the consequences of those actions.