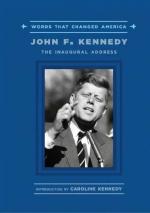 On January 20, 1961, John Fitzgerald Kennedy delivered one of America's few standout inaugural addresses and one of the finest speeches in American history. By invoking the American dream and extending its promise to the rest of the world, Kennedy's speech was an inspirational call to action that resonates even today.

It is no coincidence that the 1961 inaugural address is continually compared to Abraham Lincoln's second inaugural address as well as the "Gettysburg Address," both of Woodrow Wilson's inaugural addresses, and several of Franklin Delano Roosevelt's and Winston Churchill's finest speeches—Kennedy looked to these gifted orators and their wise and beautiful words for inspiration. According to Thurston Clarke in his book, Ask Not: The Inauguration of John F. Kennedy and the Speech That Changed America,

[Kennedy] knew this speech represented an extraordinary opportunity to present himself, as he chose to be seen, for the pages of history, and few presidents in the twentieth century cared more about history, or its perspective, than John F. Kennedy.

The power of Kennedy's inaugural speech lies in its brevity and lyrical succinctness—qualities common among Wilson's, Lincoln's, and Churchill's most remembered speeches. Like the times reflected in these previous speeches, the late 1950s and early 1960s were fraught with crisis. The cold war had been escalating since the mid-1940s, and the U.S. civil rights movement was reaching a fever pitch. Marked by an idealistic tone that elevated the speech above pessimistic cold war rhetoric, Kennedy's inaugural address relied on the hope and optimism of a new generation, one he believed would turn the experiences of the past into tools to change the future.

Though some skeptics continue to debate whether Kennedy or his principal speech writer, advisor, and confidant, Ted Sorensen, should be credited with the inaugural's authorship, most contend that even if Sorensen was its primary draftsman, the speech was pure Kennedy. Clarke writes,

On close examination, the Sorensen material that Kennedy incorporated into his speech turns out to be largely a compilation of ideas and themes that Kennedy had been voicing throughout his adult life, expressed in words that Sorensen had drawn from Kennedy's writings and extemporaneous speeches. In short, one finds that Kennedy was more than the "principal architect" of his inaugural address; he was its stonecutter and mason, too, the man whose beautiful language, either dictated by him or channeled through Sorensen, cemented together the grand ideas of his speech.

Those grand ideas, coupled with their eloquent expression, included, first and foremost, Kennedy's call for a reduction in cold war tensions, and, secondly, in Clarke's words, an extension of "the promises and guarantees of the Declaration of Independence to the entire world." A combination of crisis and idealism formed the basis of the inaugural address and set the tone for Kennedy's administration, which included the formation of the Peace Corps in 1961 and the acceleration of America's space program as well as the Cuban Missile Crisis and the Bay of Pigs. In American Orators of the Twentieth Century: Critical Studies and Sources, Theodore O. Windt Jr. points out,

The idealism was counterbalanced by a mood of critical urgency. He described the world he faced in somber words: "In the long history of the world, only a few generations have been granted the role of defending freedom in its hour of maximum danger. I do not shrink from the responsibility—I welcome it." Thus do the two major themes of his administration merge in his Inaugural Address.