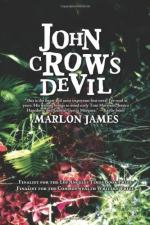 Marlon James
This Study Guide consists of approximately 51 pages of chapter summaries, quotes, character analysis, themes, and more - everything you need to sharpen your knowledge of John Crow's Devil.

John Crow is the term used to describe the murder of crows that arrive in Gibbeah. The term could be considered symbolic of the mystical things that are going wrong in Gibbeah. The crows are considered to be “messengers of the Devil” and are present in huge numbers. They continue to appear at various times and in various places. The people are wary of them.