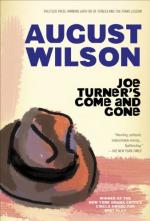 Mattie Campbell is one of Seth's tenants, who wants nothing more than to get married and have children, and who chases Herald at the end of the play. When she first comes to Seth's boardinghouse, Mattie, a twenty-six-year old woman, is seeking out Bynum's help. She is hoping the conjurer can bind her old boyfriend, Jack Carper, to her so that he will not leave again. Mattie had two babies with Carper, but they both died and he thinks she is cursed. However, Bynum says that she and Carper are not meant to be together. Although Mattie is desperate and ends up living with Jeremy, he leaves her, too. At the end of the play, Mattie realizes that she and Herald would make a good match and rushes to catch up with him when he leaves.

Molly is one of Seth's tenants who desires nothing...