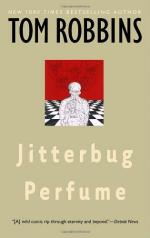 Tom Robbins
This Study Guide consists of approximately 45 pages of chapter summaries, quotes, character analysis, themes, and more - everything you need to sharpen your knowledge of Jitterbug Perfume.

Seattle is a city in the state of Washington where Priscilla lives. Seattle is a part of the modern storyline.

New Orleans is the city in Louisiana where Madame Devalier lives.

The Citadel is the name of King Alobar's castle.

Alefric is the village that Alobar and Frol arrive at after three days of travel. The village is located forty miles west of Alobar's former castle.

India is the land on the Ganges where Alobar travels to. There he is horrified at a funeral and the practice of suttee.

Constantinople is the capital of the Byzantine Empire and a place where Alobar and Kudra lived.

Arkadia is the pastureland where Pan dominates.

Alobar goes to a town on the Russian border to see a vodka maker who distills his beet pollen.

Paris is the home of Claude...

More summaries and resources for teaching or studying Jitterbug Perfume.