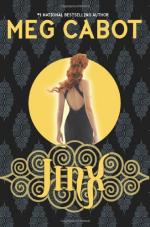 Meg Cabot
This Study Guide consists of approximately 25 pages of chapter summaries, quotes, character analysis, themes, and more - everything you need to sharpen your knowledge of Jinx.

This detailed literature summary also contains Quotes and a Free Quiz on Jinx by Meg Cabot.

Jinx is a novel by writer Sage Blackwood. In this novel, Jinx is an orphan whose stepparents try to abandon him in the Urwald, but a wizard comes along and offers to buy Jinx instead. The wizard, Simon, makes Jinx a servant in his home. When Jinx is older, Simon takes his life from him to protect him from other wizards, but by doing this he takes away Jinx’s ability to see people’s emotions. Jinx goes on a journey to find a way to recapture his life and along the way he meets two people his own age, Reven and Elfwyn, who are also cursed and looking for a way to fix their situation. Jinx is an interesting look at the complex relationships between children and adults, as well as outcasts and society.

Jinx is an orphan who lives with his stepmother and her new husband. After the couple has a new child, the man takes Jinx off the path in the Urwald to abandon him. However, the man gets lost. As he struggles to find his way back to the path, a wizard, Simon, comes along and offers to buy Jinx. Before the transaction can be completed, trolls come and steal Jinx’s stepfather away.

Jinx goes to live in Simon’s home. Simon is not an affectionate man, but he does not hit Jinx, so Jinx decides that this is better than his previous situation. Some years pass as Jinx works as a servant for Simon. One day Jinx meets Sophie, Simon’s wife. Sophie is a kind woman who comes from a mysterious place called Samara. Sophie often argues with Simon about Jinx, forcing Simon to teach Jinx to read and encouraging him to teach Jinx magic.

Jinx is not good at the magic spells Simon tries to teach him, but he has a natural ability to read people’s emotions in colors around their heads and to speak to the trees in the Urwald. One day Simon has Jinx help him with a difficult spell. When it is over, Jinx realizes that Simon has stolen something from him. Jinx can no longer see emotion clouds. Jinx becomes angry with Simon and searches for a way to fix his magic.

One day Jinx figures out how to go into a secret part of Simon’s home that is hidden with a spell. This section of the house has a door into Samara. Jinx goes in search of Sophie, but when Simon comes after him, Simon is nearly killed. Still angry and in search of answers, Jinx decides to leave Simon’s house.

Jinx begins his journey by attempting to find the house of the witch, Dame Glammer. On the first day, Jinx is robbed by a young man from one of the kingdoms on either edge of the Urwald. This young man appears repentant afterward and asks to travel with Jinx. Jinx reluctantly agrees. Later, Jinx and the boy, Reven, meet a girl in a red cloak called Elfwyn who is on her way to her grandmother’s house, who just happens to be Dame Glammer.

The journey to Dame Glammer’s is long and confusing because the children cannot figure out how to get there. When they finally arrive, Dame Glammer tells the children that only the wizard, Bonemaster, could possibly be powerful enough to take away their curses. For this reason, the trio heads out to the Bonemaster’s even though they have heard rumors of the horrible things the Bonemaster does to unwanted visitors.

The Bonemaster takes the trio prisoner almost as soon as they arrive. It is clear the Bonemaster is only keeping them alive, particularly Jinx, to lure Simon to his home. The Bonemaster believes Simon has stolen something from him. However, Jinx and his friends are unwilling to sit around and wait. They decide to find a way to escape. Jinx finds the source of the Bonemaster’s power and decides to take that with them as well. Unfortunately, as the trio are making their escape, the Bonemaster catches them. In the struggle, Jinx falls from the cliff.

Simon arrives and traps the Bonemaster on the cliff around his island. Simon then takes Jinx back to his house where he performs a spell to return his life to him. Jinx survives and gets his ability to see emotions back. Jinx also gains a better understanding of Simon. In the end, however, Jinx decides to help Reven solve the conflict that led to his curse by traveling to one of the nearby kingdoms.

More summaries and resources for teaching or studying Jinx.