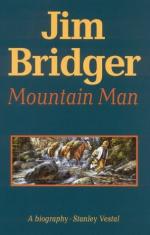 This detailed literature summary also contains Topics for Discussion and a Free Quiz on Jim Bridger, Mountain Man; a Biography by Stanley Vestal.

Jim Bridger's family moves west to Missouri. Jim is forced to go to work and becomes interested in exploring the frontier. Jim joins a fur trapping expedition and learns about surviving in the wilderness, trapping beaver and fighting Indians. He becomes a free trapper and is soon a partner in the Rocky Mountain Fur Company and part-owner of Ft. Laramie. By 1837, the beaver trade is dying out and Jim begins to look for a new occupation. Jim Bridger is fascinated by the wilderness and shows his love for it by remembering as much as he can about each spot he passes. Already, Jim has discovered sites such as the Great Salt Lake, the geysers and the hot springs of the Yellowstone Lake region.

Jim sets up Ft. Bridger in 1843, near his friends, the Snake Indians on a fork off the Green River and on the Oregon Trail. He works there for over 10 years, taking out time occasionally to go back to beaver trapping. Jim helps many families get through the rest of the Oregon Trail, repairing their wagons and buying their extra goods. When Brigham Young enters the area with his Mormons, they seem to be just another group of travelers, but soon Jim is in trouble with them. Brigham Young has the Mormons settle not far from Ft. Bridger and soon false rumors are spread that Jim is arming the Indians to attack the Mormon settlements. Jim is informed by his partner Louis Vasquez in Salt Lake City that the Mormon Sheriff is going to march on Ft. Bridger. Jim hides in the woods, but his fort is looted and ruined.

Jim Bridger travels to St. Louis, Missouri and Washington DC to file his claim to the territory around Ft. Bridger. He also speaks to government officials and even the President about the unlawful activities of the Mormons. In July 1857, Jim is hired as a scout for the U.S. Army force that is sent to occupy the Utah Territory. Bridger makes sure the Army men survive the bitter winter and the occasional guerrilla warfare attacks by the Mormon forces. In the Spring of 1858, the Army marches into the Utah Territory and the Mormons surrender, though Brigham Young is given a Presidential pardon.

Jim has earned a great reputation as a guide and scout in the U.S. Army. Jim Bridger first works as a guide for Captain Raynalds of the Army Corps of Engineers to map out the drainage area of the Yellowstone River. Captain Raynalds creates a new map of the area based on Jim's in-depth knowledge. Jim works as a guide helping engineers map several routes. Jim helps General Connor keep most of his troops alive in the Powder River expedition, though the results are mixed. There is a gold rush in the Black Hills and the roads have to be kept open. Jim, with the help of Pawnee Scouts, has some success before the force is pulled out. In the next year, Jim is a scout and adviser to Col. Carrington, whose orders are to open a road to Montana. Col. Carrington builds a fort and defends a road, and is in a defensible position. Then, his second in command, Fetterman violates orders and falls into a Sioux ambush, where 81 men are wiped out. Jim stays around for the commission of inquiry and the shutting down of forts that violate Indian treaties. Jim stays in the mountains a couple more years but is slowly going blind. He has to return to his farm in Missouri and spends his last years with his daughter, Virginia.