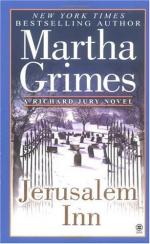 Martha Grimes
This Study Guide consists of approximately 30 pages of chapter summaries, quotes, character analysis, themes, and more - everything you need to sharpen your knowledge of Jerusalem Inn.

This detailed literature summary also contains Topics for Discussion and a Free Quiz on Jerusalem Inn by Martha Grimes.

Disappointed that the pubs aren't open, Richard Jury walks into a church in the village of Washington and interrupts a christening. He leaves hurriedly and walks into a cemetery where he discovers a woman stooped over headstones. The woman, later identified as Helen Minton, seems dizzy and Jury walks her home where she invites him in for a drink. They share sandwiches and Jury invites her out to dinner later in the week. She accepts. When he returns for the date, he finds that she's dead in an historic home, her body discovered by tourists. While an initial look at the scene indicates that it could have been death by natural causes, Jury doesn't believe so, and the autopsy soon indicates that he was correct. Jury, as a superintendent of Scotland Yard, isn't officially assigned to the case but soon becomes involved.

His investigation takes him to a neighbor who says Helen had indicated that she sometimes went to a pub, Jerusalem Inn. There, Jury discovers a working class clientele and a young man who cleans up in return for a place to stay. The young man, Robbie Lyte, was raised at the Bonaventure School, which caters mostly to orphans and is run by a woman named Miss Hargreaves-Brown. It's later proved that the head mistress is really a woman named Annie Brown and that she was paid off for her role in helping to arrange the adoption of Helen Minton's illegitimate child. That child initially appears to be Robbie Lyte, but Jury's investigation takes him on to Spinney Abbey, home of Charles and Grace Seaingham.

There, Charles' mistress and a guest at their home, Beatrice Sleight, is murdered. Jury soon makes the connection that Beatrice had threatened to tell a secret - the same secret Helen Minton had been near to discovering, and that was shared by another woman, Grace Seaingham, who had recently shown all the signs of being poisoned as well. Jury learns that Robby Lyte had been raised by a woman named Danielle, a maid. Jury eventually uncovers more of the story until he concludes that the secret is that Robbie Lyte was not Helen's son, but that Helen's true son is a young man of the same age named Tommy Whittaker. Tommy's guardian, Elizabeth St. Leger, is the woman who had arranged the swap and who had committed the murders. With the story complete, Jury agrees that he won't arrest St. Leger until after the holidays though he seems to believe that St. Leger will never allow the case to come to trial and will die before the time for her arrest. Jury also decides that Tommy and Robbie need not be told of their true identities and the story ends with Jury watching Tommy play snooker - a game he loves.

More summaries and resources for teaching or studying Jerusalem Inn.