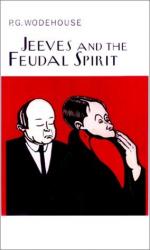 P. G. Wodehouse
This Study Guide consists of approximately 35 pages of chapter summaries, quotes, character analysis, themes, and more - everything you need to sharpen your knowledge of Jeeves and the Feudal Spirit.

Jeeves and the Feudal Spirit Summary & Study Guide includes comprehensive information and analysis to help you understand the book. This study guide contains the following sections:

This detailed literature summary also contains Topics for Discussion and a Free Quiz on Jeeves and the Feudal Spirit by P. G. Wodehouse.

Jeeves and the Feudal Spirit by P.G. Wodehouse is a book in a series of novels revolving around Bertram Wooster, a wealthy bachelor, and his butler, Jeeves. In this tale, Bertram and Jeeves travel together through several humorous and outrageous adventures where Jeeves, as usual, saves Bertram and members of his family from embarrassment, violence, and even marriage. It is a wonderful comedy filled with British humor and situations only the elite of British society can imagine.

Wooster, the main character of the novel, begins the story by discussing his newly grown mustache, and his butler's dislike of the facial hair. Soon after, a series of linked events place Wooster's life in danger as Stilton, a local bully, and his fiancee, Florence, have problems in their on again off again relationship, and Wooster becomes the target for Florence's affections. When his aunt Dahlia calls for his help to raise the spirits of a young man at her estate, he is only to happy to help. On arriving, however, it is revealed that Percy, the young man, is in love with Florence. Dahlia herself is in trouble, as she has pawned a pearl necklace in an effort to retain the writing services of Daphne Morehead, in order to sell her newspaper to Percy's father, Mr. Trotter. Her husband, Tom, is having someone look at the necklace she has, which is now a fake. Jeeves devises a plan to steal the necklace.

When Florence and Stilton again break their engagement due to Wooster's influence, Stilton arrives at the estate, threatening to harm Wooster. As Wooster tries to sneak into Dahlia's room to steal the fake necklace, he finds himself instead in Florence's room, where Stilton locates him. The following day, Wooster retains a cosh for protection, but drops it during a scuffle with Stilton. Dahlia retains it and after being unable to persuade her husband's friend Spode into lying about the necklace, she bashes him on the head. Wooster later returns to find the cosh, and discovers the safe open. He steals a pearl necklace only to discover it is not Dahlia's, but a guests. It takes the ingenuity of Jeeves to once again save him, Dahlia, and everyone else in the family from disaster.

The novel is full of humorous situations, light relationships, and constant deception that leaves one waiting breathlessly to see how Jeeves will help the family out of crisis. The characters, while often self centered, are easy to love, and have an endearing way of winning—if not forcing their way—into the hearts and minds of readers with their quick wit and comical interactions.

More summaries and resources for teaching or studying Jeeves and the Feudal Spirit.

Jeeves and the Feudal Spirit from BookRags. (c)2022 BookRags, Inc. All rights reserved.