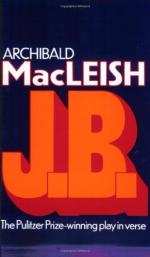 Get J. B. from Amazon.com
View the Study Pack
View the Lesson Plans
Study Guide
Order our J. B. Study Guide

Books Like J. B. by Archibald MacLeish | Suggested Reading

Archibald MacLeish
This Study Guide consists of approximately 68 pages of chapter summaries, quotes, character analysis, themes, and more - everything you need to sharpen your knowledge of J. B..

MacLeish draws heavily on the Book of Job, part of the Old Testament, for the basic plot and some of his characters' names. The italicized lines in the printed version of J. B., spoken by Nickles, Zuss, and others, are quoted from the King James Version, first published in 1611.

Collected Poems, 1917-1952 (1952) was MacLeish's second Pulitzer Prize-winning book. The poems in this volume demonstrate MacLeish's range, from public to personal voice and from political to intimate themes.

In Songs for Eve (1954), MacLeish draws on the biblical story of Adam and Eve's Fall and their eviction from the Garden of Eden, as he draws on the story of Job for J. B. Here, Eve is glad to have left Eden because the knowledge of mortality makes her feel more alive.

The script for the play, as it was performed on Broadway...

More summaries and resources for teaching or studying J. B..