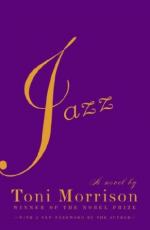 Toni Morrison
This Study Guide consists of approximately 56 pages of chapter summaries, quotes, character analysis, themes, and more - everything you need to sharpen your knowledge of Jazz.

The July 1917 parade in Harlem protests the black people killed in race riots in East St. Louis, including Dorcas's parents. The cold, silent men march carrying banners with promises from the Declaration of Independence. What did the banners say?

Why are the men in the parade silent? What is the message of the incessant beat of the drums?

Morrison's language is usually lush and lyrical. During key action scenes, like Alice Manfred's first encounter with Violet, the language becomes simple and stark. Why did the author choose to write that way? Do you notice the change in language when you are reading the book?

Violet's family suffers a great deal from the racism in their native Virginia. What are some examples of this racism?

Why is Golden Gray so disturbed to learn that his father is a black man?

When Dorcas's father and mother...

More summaries and resources for teaching or studying Jazz.