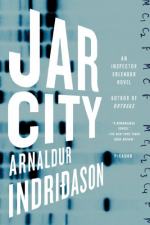 As Chapter 14 starts, Erlendur and Sigurdur Óli are still with Ellidi. Ellidi attacks the men, and the guards grab him. Erlendur asks about the other rape victim, but Ellidi does not respond. The guards take Ellidi away. As they leave the prison, a guard runs out to tell them that Ellidi wants to speak with them and that he will give them the information they want if he can talk to Erlendur alone.

Erlendur tells Sigurdur Óli about the conversation as they leave the prison. Erlendur...