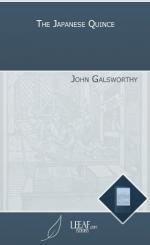 An third-person omniscient narrator relates the events of the story. Galsworthy' s choice in narrative technique is an important feature of "The Japanese Quince" and contributes to the ultimate meaning of the story. Permitted access to unspoken thoughts, an omniscient narrative traces the workings of Mr. Nilson's mind as he moves through his morning. Although Mr. Nilson says nothing out loud, readers are privy to his health concerns and his uneasiness around Mr. Tandrarn. Likewise, readers are aware that he is doing his best to appreciate the morning, whereas a third-person limited narrator would not be able to impart much more than the fact that he took a walk around the square while holding his newspaper.

"Doppelganger" is the literary term sometimes used to describe a character who functions as a double for the protagonist. In "The Japanese Quince" Mr. Tandram is Mr. Nilson's doppelganger, a...