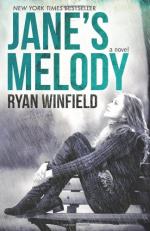 Ryan Winfield
This Study Guide consists of approximately 48 pages of chapter summaries, quotes, character analysis, themes, and more - everything you need to sharpen your knowledge of Jane's Melody.

Jane’s Melody by Ryan Winfield is the story of a mother trying to make sense of her daughter’s death. Jane McKinney's daughter Melody has just died of a drug overdose, and Jane is distraught. She wants to know all about her daughter whom she has not seen for the last year of her life. Her grief leads her to stalk a young musician who she believes was her daughter’s boyfriend.

Caleb Cummings is a twenty-five year old homeless musician. Jane offers him a job to clear her backyard and put in a flower garden and fountain because she believes the man has a connection to her daughter. The man lives in her house while he works. Jane feels guilty when she becomes attracted to him because he is so young. Also, he was her daughter’s boyfriend.

Caleb helps Jane deal with the grief she feels about her daughter. The two begin an intimate relationship despite the fifteen year age difference. Jane is bothered by the difference in their ages, but Caleb is not concerned by it. Though he loves Jane, she feels that she is robbing the young man of his youth and dreams. When she learns that he has been offered a chance to become part of a band in Austin, she cannot let him pass up the opportunity. He tries to get her to go with him, but the memories of her daughter are in Washington State. To make him leave, Jane tells him that she does not love him.

The death of her best friend from a brain tumor shows Jane that life is short. She cannot live in fear. This gives her the catalyst she needs to move on with her life. Jane sells her home on Bainbridge Island and leaves Seattle behind. She goes in search of Caleb, the only man she has ever loved.

More summaries and resources for teaching or studying Jane's Melody.