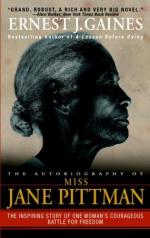 Ernest Gaines
This Study Guide consists of approximately 33 pages of chapter summaries, quotes, character analysis, themes, and more - everything you need to sharpen your knowledge of The Autobiography of Miss Jane Pittman.

This detailed literature summary also contains Topics for Discussion on The Autobiography of Miss Jane Pittman by Ernest Gaines.

Published in 1973, The Autobiography of Miss Jane Pittman follows the tradition of the Deep South slave narrative and chronicles the experiences of the title character over the course of nearly a century of living. With its intimate and revealing portrayal of the lives of blacks from slavery through the civil rights movement, the novel has received numerous accolades and was made into a popular television series starring Cicely Tyson as Miss Jane Pittman.

Before the opening of the first section, or Book, of the novel, there is an introduction from the “editor,” a teacher who has been attempting to convince Jane Pittman to tell him her story. Finally, in 1962, the old woman finally opens up to him and, with the help of several friends who aid in filling in the spaces left by faults of memory, she recalls the various events of her past.

Born as a slave named Ticey, Jane spends her early years without her parents, working in the Big House on a Louisiana plantation. As the Civil War draws to a close, the young girl meets a Union soldier who informs her that she will soon gain her freedom. He offers her the new name Jane Brown, which she refuses to abandon even when her owners insist, with force, that she retain her given name, “Ticey.” For her disobedience, Jane is exiled to the fields.

After they are emancipated, Jane and the other former slaves leave the plantation, led by a woman named Big Laura. The group is discovered by a party of white “hunters,” and everyone is massacred except for Jane and a young boy named Ned. The two continue their journey to Ohio alone, set on Jane’s goal to reach the home state of the Union soldier who had given Jane her name. After a few weeks of travel and assurances by several people that Ohio is beyond their reach, Jane and Ned find themselves in the care of Job, a poor white man who offers them shelter and takes them to a nearby plantation for their safety. Mr. Bone, the plantation owner, puts Jane to work at reduced wage and sets aside a portion for Ned’s education. Jane and Ned move into a cabin and, after a short while, Jane sees her pay increase to reflect her workload.

The pair’s work on the plantation eventually comes to an end when the original owner, Colonel Dye, buys his property back and re-institutes most of the violent, segregationist practices of the slavery life. As a result, there is a northern exodus of blacks who wish to escape the changing situation. Ned, now a teenager, begins to help organize the transition, much to the disapproval of the white landowners. With the Ku Klux Klan threatening his life, Ned unwillingly parts company with Jane, who refuses to leave, and journeys to Kansas, where he receives an education and soon enlists in the army.

It is not long before Jane finds a husband in a man named Joe Pittman. The two leave the plantation and settle close to the Texas border, where Joe finds employment as a horse breaker on a ranch. After a time, Jane becomes concerned that Joe, getting up in years, is becoming unfit to work with horses. Haunted by dreams of his being thrown, followed by the emergence of a new black stallion which resembles the animal in her nightmares, Jane does her best to convince Joe to back down, even going so far as to ask a local hoodoo woman for advice. In an effort to save her husband, Jane intentionally lets the stallion escape from the corral. Despite her best intentions, Joe is killed by the horse in the recapture effort. Jane eventually leaves and settles in another part of Louisiana.

Ned returns to Jane with a wife and three children. He sets up residence and opens a school to educate blacks. Ned’s lessons on politics and civil rights anger the local whites, who hire a Cajun associate of Jane’s named Albert Cluveau to kill him. When Cluveau accomplishes this deed, Jane tells the man that he will die a miserable death, a prediction which later comes true.

Jane finds her way to a plantation owned by Robert Samson. Robert’s affair with a black woman has left him with a son named Timmy, a situation that causes trouble within the man’s family, especially with his wife and other (white) son, Tee Bob. Timmy, who resembles his father in looks and mannerisms more than Tee Bob does, is eventually banished from the plantation for his rebellious spirit.

After a number of years, Tee Bob becomes enamored with Mary Agnes LeFarbre, a Creole teacher. His forbidden love for the mixed-race woman leads him to secretly ask for her hand in marriage against the advice of his family and friends. After she rejects him, Tee Bob commits suicide. Tee Bob’s godfather quells the fury of those asking for the blood of Mary Agnes, acknowledging that they and their system of segregation are to blame for Tee Bob’s bitter and frustrated end.

In the closing Book of the novel, Jane tells the story of Jimmy Aaron, a boy whom everyone believes will lead them to salvation. After spending many years beyond the confines of the plantation, he returns, educated in the ways of the civil rights movement and ready to protest. Jimmy Aaron is shot before he can lead the charge to the courthouse. Jane, with the help of another young man, takes up the fallen Jimmy Aaron’s cause and leads the march in his stead.

More summaries and resources for teaching or studying The Autobiography of Miss Jane Pittman.