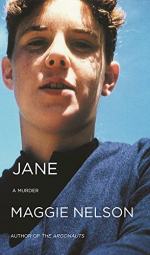 This guide was created with the following edition of this book: Nelson, Maggie. Jane: A Murder. Berkeley: Soft Skull Press, 2005.

Interspersed with entries from her aunt Jane's diary, Maggie Nelson explores the memories of the murdered woman, all the while trying to reconstruct some sort of image of the woman who has become an important part of her family's lore over the years. Nelson has dreams in which she seems to be adopting the identity of her aunt, noticing the physical damage of the murdered woman on her own body through a surreal lens. Facing scrutiny from her grandfather over her investigation, Nelson begins to understand the basic information she has about her aunt, tidbits of information, including the fact that Jane was born in Muskegon, Michigan on February 23, 1946 and died on March 20, 1969, almost four years before Nelson's own birth. But some of the stories about Jane are in the air, including the loss of her belongings in the Michigan Law Quad after her death.

Finding Jane's journals from 1966 in her mother's belongings, Nelson secretly makes copies and then explores the history of the death in the New York Public Library, surprised at the image of 23-yaer-old Jane that was still the same when Nelson was younger. The history of the family in Michigan is explored through the letters of ancestors who had arrived from Sweden, working in factories in the early twentieth century. Despite some hesitation, Nelson's mother, Barb, takes a box of Jane's belongings home, including her early journals. Her mother mentions how Jane was chatty growing up, and Nelson compares the possibility of personalities between Jane and Anne Frank. Through Jane's diary entries from 1960-61, Nelson begins to compile an image of a young girl who had a contentious relationship with her sister, Barb, whom she admired and was jealous of for her social ease, with diary entries punctuating her particular vehemence for Barb during those years.

As a teenager, Jane began to have a deteriorating relationship with her mother, claiming a loss of respect for her in her diaries, which Nelson explains through her grandmother's bleak family past. Jane read the novel Mrs. Mike, then expressed a wish for a more fulfilling and emotionally stable life, similar to her sister Barb. After her acceptance in the University of Michigan, Jane's relationship with her sister improved, as they both attended the same college, ran in different circles, but were at ease with each other, with Jane expressing a more positive admiration for her sister in her journal. Barb's boyfriend turned out to become her husband and Nelson's father. Meanwhile, Jane's relationship with her parents worsened, as she was made unwelcome at home.

Nelson then explores the romantic history of Jane, finding some evidence of distress in a journal entry. Nelson tracks down Phil, the man Jane had a serious relationship with. Communicating with him, Nelson learns that they met during an economics class, as Phil was a graduate teaching assistant. He began to admire Jane and they fell in love, joining causes over their admiration for socialism, including doing campaign work for Eugene McCarthy. Further distancing herself from her parents, Jane applied to the Michigan law school and won a fellowship. Through Phil's old photos, Nelson sees a different, more vulnerable side of Jane who expresses happiness in her journals.

With Phil having been offered a job at NYU, Jane decided to transfer to the law school there as well. Her plan was to drive home and reveal her relationship to her parents. While a person named David Johnson was supposed to drive her, there was a mix up and Jane went off with a stranger, unrevealed, who murdered her while on the I-96. Her body was found 14 miles from Ann Arbor the next day, as she was strangulated before being shot twice in the head, and her body was arranged on a tombstone. After her death, the family dealt with the ongoing police investigation and a series of crank calls.

Nelson wonders what happened in the five hours between Jane's departure from Ann Arbor and her death. The focus then shifts to the other murders of young, politically liberal women that transpired around the same time, with the police almost catching a young man revisiting one of the crime scenes. Nelson uses excerpts from "The Michigan Murders," a book that focuses solely on the death of Jane and other women, including information that Jane had not been raped before her death. Barb remembers a distress call from Jane but Nelson is hesitant to take it seriously. Blood was found in an abandoned barn that burned down after its discovery. A suspect, John Collins was arrested, after blood and hair was discovered in his garage by his uncle, a police officer. A contempt for females and a history of rage was revealed, while .22 bullets, the same that were used to shoot Jane, were found in his garage. He was convicted despite his plea of not guilty. Nelson imagines conversations with Collins, trying to uncover whether or not he really was the murderer, and realizes that it was Jane's death that mattered most to her, not Collins' crimes.

Barb learned to bar her doors and windows in the aftermath of Jane's death, while Nelson and her older sister, Emily, coped with the loss of Jane across time in peculiar ways, playing with the dolls that their mother and Jane had as children, and playing with the idea of ghosts in their house, where Nelson pretended a dead sister of hers lived in the basement. Nelson wonders how Jane would have turned out had she been alive, expressing jealousy that Emily's middle name is Jane. Nelson talks about her father and his burning personality, as he accomplished a lot in a relatively quick life before succumbing to a heart attack. She had a close relationship with her sister, Emily, who was troubled growing up.

When Nelson reveals her desire to revisit Jane's past, Barb surprisingly agrees to accompany her. They visit Jane's grave and the grave where she was left to die. Nelson tries to grasp some semblance of her aunt as she follows her journey before her death. Despite the lack of revelation after everything, Nelson expresses a sense of ease at having initiated the journey in the first place and the calm she feels as a result.