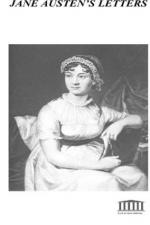 Jane Austen
This Study Guide consists of approximately 39 pages of chapter summaries, quotes, character analysis, themes, and more - everything you need to sharpen your knowledge of Jane Austen's Letters.

This detailed literature summary also contains Topics for Discussion and a Free Quiz on Jane Austen's Letters by Jane Austen.

The letters generally are written by Jane Austen to her older sister and best friend, Cassandra Austen. Other letters are written to Jane's brothers, friends, nieces and nephews. Because Cassandra and Jane both remained unmarried during their lives and they lived together, these letters would not have been necessary except for the extent of visiting that both girls partook in. The letters detail their visits to their brothers' families and their friends' homes. The letters are filled with Jane's opinions of people, books, plays, events and fashion. They also record the daily events that occurred in the Austen home, such as marriages, births, deaths, home improvements, purchases and illnesses.

Jane writes to her sister about the balls that she attends. She also acquaints her Cassandra that their brothers, Edward and Frank, have left home to seek their fortunes by means of the navy. Jane comments on the new style of gown that is popular and alludes constantly to the writings of Frances Burney. She assures her sister that her mother's illness has passed. Jane praises Frank and Charles when they receive their promotions, and she maintains a correspondence with them during their absences from home. She touches upon Edward's inheritance of three estates from a distant cousin and the subsequent change of his surname to "Knight". She mentions writing "First Impressions" which later becomes "Pride and Prejudice". Jane laments when Edward is ill. She describes the plays she sees and her opinions of them, as well as the improvements that are made to their home and garden. She visits Martha Lloyd and brings her friend home with her for a visit.

The Austens move to Bath when Mr. Austen retires in 1801, and Jane describes the houses that they are considering to Cassandra. Their household articles are appraised and sold, and Mr. Austen settles business for their removal. Jane initially finds the parties small and the people disagreeable at Bath, but she enjoys bathing. Mr. Austen dies in 1805, and Jane writes to Frank to acquaint him with their grievous news. Frank plans to marry Martha Lloyd after his first wife, Mary, dies. Jane visits her friend Harriet at Goodnestone. She describes the births of each of her nephews and nieces and their subsequent visits. She visits Mrs. Knight for several days. Jane laments the death of Edward's wife. She jokes about marrying men that she comes into frequent contact with.

Jane requests the return of her unpublished manuscript "Susan". She publishes "Sense and Sensibility" and "Pride and Prejudice" anonymously. She also publishes "Mansfield Park". She is pleased with people's opinions of her writing. Jane encourages Anna, Frances and Caroline's attempts at writing. She also encourages Caroline's piano playing, and congratulates her when she receives a piano of her own. She helps make bridal clothes for Anna as she prepares to marry Benjamin Lefroy. Jane gives Frances Knight love advice: to be patient. Henry becomes ill and is unable to help facilitate the publishing of "Emma" with John Murray, a London publisher. Jane decides to dedicate "Emma" to the Prince of Wales, and, in the process, begins corresponding with James-Stanier Clarke who encourages her to write a historical romance, but Jane refuses. She is pleased with Sir Walter Scott's review of "Emma" in the Quarterly Review. Jane congratulates James-Edward when he graduates and encourages him in his writing aspirations.

Jane laments Frances Knight's plans to marry because she does not feel that Fanny's fiance, Mr. Wildman, is in love enough with her niece. She puts "Catherine" on the shelf, perhaps forever, but tells Fanny that she has another work ready for publication. This unnamed work is "Persuasion" and is not published until after Jane's death. Jane writes to Charles that she is very ill and that the news of her uncle's will has made her worse. Jane and Cassandra move to Winchester for Jane's health, and Jane writes her Last Will and Testament, appointing Cassandra as her executrix and heiress. She praises Cassandra's skill and care as her nurse. Cassandra runs an errand for Jane, and while she is gone, Jane has a seizure. She suffers greatly and dies. Cassandra writes to Fanny Knight to relate the news and laments her lost treasure, swearing that no one understands what she has lost because they do not know what Jane meant to her sister. She praises Fanny for being so like Jane. Cassandra hopes to be reunited with her sister in heaven someday. The funeral goes well and everyone mourns greatly for Jane. Jane Austen is buried in Winchester Cathedral.