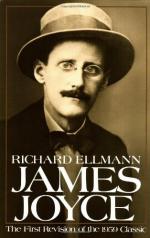 Richard Ellmann
This Study Guide consists of approximately 27 pages of chapter summaries, quotes, character analysis, themes, and more - everything you need to sharpen your knowledge of James Joyce.

This detailed literature summary also contains Topics for Discussion and a Free Quiz on James Joyce by Richard Ellmann.

"James Joyce" is a biography of the author James Joyce. Originally published in 1959 (only eighteen years after Joyce's death), Richard Ellmann's book uses many original interviews, letters, and other first-hand sources to establish the author's life.

The first section, Dublin, explores Joyce's early life in Ireland and the origins of his family. Although his family is at one point distinguished (granted a coat of arms), Joyce's father, John, is a spendthrift and an alcoholic and has no fewer than eleven mortgages throughout his lifetime on various properties. Joyce's mother, May, is by all accounts a sweet and musical woman. Joyce spends his early life distinguishing himself in school, through exams and exhibitions, particularly in English composition. He spends a lot of time with his brother Stanislaus, with whom he is very close. However, there is not always money for the boys to attend school and Joyce is partially self-educated. He eventually takes up studies at University College, Dublin, though by this point he has become disillusioned with both the academic system and the church and, while he manages to pass his courses, does not do so with distinction. He spends a brief amount of time studying medicine, transferring to Paris to continue his studies, but returning home. There he meets Nora Barnacle, who fascinates him and who he eventually convinces to travel with him.

In the second section, Pola, Rome, Trieste, Joyce and Nora travel throughout Europe as he searches for employment as a language teacher and tries to publish some of his early stories, book reviews, and other writings. Though they are still unmarried, Nora gives Joyce two children: Giorgio and Lucia. The family moves around quite a bit, from Pola, where Joyce teaches English, to Rome, where he works in a bank, to Trieste, where he again teaches for Berlitz. During this time, Joyce works on many of his early publications, including the collection of short stories The Dubliners and his autobiographical novel, Portrait of the Artist as a Young Man. At this time, he also makes a variety of literary acquaintances, from Ezra Pound (the poet) to Harriet Weaver, the editor of influential publications.

In Zurich, the third section, Joyce lives a relatively comfortable life and is extremely social. However, he begins to experience some of the health troubles, including recurrent eye trouble, which will plague him for the rest of his life. He works on many literary endeavors, including a play called Exiles, and helps to establish an English-speaking literary troupe, though this ensnares him in legal troubles with an actor. Many friends help support Joyce financially during this time.

The fourth section, Paris, describes the Joyce family's time living in Paris. This is a pivotal point in his life in many respects. His health fails during this time, with eye, dental and stomach problems. His son gets married and has a son of his own, while his daughter, Lucia, shows signs of the schizophrenia for which she will eventually be institutionalized. Joyce makes the acquaintance of Sylvia Beach, the renowned literary figure and bookstore owner, who will publish Ulysses. He also begins writing Finnegan's Wake during this period.

In the fifth and final section, the Joyces move from Paris as the Second World War approaches, eventually moving back to Zurich. There, Joyce's health fails for the last time, as a misdiagnosed stomach ulcer perforates. Though he makes it through the surgery, he weakens in the week that follows and eventually falls into a coma and dies.

More summaries and resources for teaching or studying James Joyce.