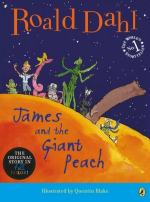 Roald Dahl
This Study Guide consists of approximately 18 pages of chapter summaries, quotes, character analysis, themes, and more - everything you need to sharpen your knowledge of James and the Giant Peach.

James and the Giant Peach Summary & Study Guide includes comprehensive information and analysis to help you understand the book. This study guide contains the following sections:

This detailed literature summary also contains Quotes and a Free Quiz on James and the Giant Peach by Roald Dahl.

James and the Giant Peach is the story of a young boy who escapes an abusive home in a magical peach. Along the way, he makes new friends, and discovers the joys of freedom and friendship, which had previously been alien ideas to him.

At the opening of the novel, James is living with his two terrible aunts after an accident at the zoo claimed the lives of both his parents. Upon moving in with his aunts, James' life of abuse begins immediately. His aunts treat him terribly, forcing him to work all day long, denying him any friends or schooling, and calling him names. James is terribly surprised then, when he finds a mysterious old man hiding in the bushes. The man gives James a bag full of magic beans and warns him to be very careful with them as they are extremely powerful. While he is running back to his house, James trips and spills the beans in his Aunts' garden. The beans immediately burrow their way into the ground and produce a massive peach at the top of the peach tree. When no one is around, James sneaks up to the peach and finds a magical tunnel there. He climbs inside and is greeted by a host of giant insects, including a Grasshopper, a Ladybug, a Spider, and a Centipede. Through the course of their journey, these insects become James' closest friends.

After chewing through the vine that connects the peach to the tree, the travelers are off, rolling down the massive hill toward the sea. Once the travelers reach the sea, their troubles begin. First, the peach is attacked by a flock of hungry sharks. James uses his quick thinking to concoct a plan using the Earthworm as bait to lure seagulls close to the peach so he can lasso them for their flying power. When James has successfully ensnared 501 seagulls, the peach is lifted out of the water to the safety of the skies. The travelers' good luck does not last long, however, when Centipede is accidentally knocked off the side of the peach and James must jump overboard to find him again. Later, Centipede insults the frightening Cloud Men, who retaliate by pelting the travelers with homemade hailstones.

After their encounter with the Cloud Men, the travelers safely reach New York City where they land and are welcomed with a massive parade. Upon arriving in New York City, each of the travelers leads a life of wealth and success. Centipede becomes the Vice-President of a boot and shoe manufacturing company, Silkworm and Spider start a company weaving ropes for tightrope walkers, Grasshopper becomes a member of the New York Symphony, Glow-worm becomes the light inside the torch of the Statue of Liberty, and Ladybug marries the head of the fire department and lives happily ever after. But perhaps James has the brightest future of all: he moves into Central Park, having converted the giant peach pit into a makeshift home, and spent the rest of his days telling stories about his adventures to all the hundreds of visitors who flocked to his door each day. The boy who once had no friends at all now has all the friends and playmates in the world.

More summaries and resources for teaching or studying James and the Giant Peach.

James and the Giant Peach from BookRags. (c)2022 BookRags, Inc. All rights reserved.