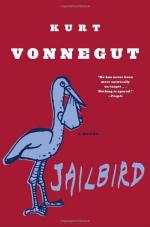 Kurt Vonnegut
This Study Guide consists of approximately 42 pages of chapter summaries, quotes, character analysis, themes, and more - everything you need to sharpen your knowledge of Jailbird.

This detailed literature summary also contains Topics for Discussion and a Free Quiz on Jailbird by Kurt Vonnegut.

This thematically and narratively complex book tells the life story of Walter Starbuck, ex-socialist, ex-capitalist, and ex-con. Moving fluidly back and forth between past and present, incident and insight, irony and irony, the novel explores themes relating to the tension between capitalism and communism, layers of meaning inherent in layers of identity, fact, and fiction, and the interconnectedness of all things.

The novel begins with a lengthy prologue written in the character of the author and ostensibly a summary of the novel's historical origins. While some elements of what is described here are obviously real, others are just as obviously fictionalized, giving the early (and clear) sense that the lines between what is fiction and what is fact are, in this book at least, quite blurred.

The narrative proper begins with the protagonist, the elderly Walter Starbuck, in prison. As he waits for the guard to conduct him out the gates, he reflects upon several important aspects of his past: his intensely loving relationship with his wife Ruth, his involvement with the Watergate scandal (the circumstances of which being what brought him to prison), and his lifelong attraction to both socialism and capitalism. He also reflects on the meaning and ramifications of a key incident in his life: his offering the name of an ex-friend to a committee investigating the presence of communism in 1950s America.

Upon his release from prison, Starbuck has a series of encounters with individuals who treat him with evident, sometimes surprising kindness. These encounters are described with references to The RAMJAC Corporation, an omnipresent and highly profitable business conglomerate; in other words, an embodiment of capitalism. Eventually Starbuck arrives in New York City, where he lived as a capitalistically inclined young man and where he had his first actual encounters with both women and socialism. One of those women, Mary Kathleen O'Looney, became both his lover and his socialist inspiration. She returns to his life as an old woman, still devoted to the cause of socialism but several decades older, several degrees more deranged, and several billion dollars richer. As the result of her marriage, she is in fact the head of the infinitely wealthy RAMJAC Corporation.

A narrow escape from the law allows Starbuck and Mary Kathleen rekindle their long dormant relationship. At the same time, Starbuck also re-encounters the ex-friend he betrayed decades earlier, and is surprised to discover that he (Starbuck) has been forgiven by both the friend and by Mary Kathleen (who, Starbuck says in narration, he dumped because she wasn't high class enough). Soon after their reunion, however, the mad Mary Kathleen is hit by a taxi and dies. In her last moments, however, she is sane enough to do three things: gently confront Starbuck with an important truth about himself; tell him where her will is; and reveal that her will leaves everything she owns (including RAMJAC) to the people of America. After her death, Starbuck conceals the will and accepts a full time job at RAMJAC (which, as he himself says, would have fallen apart if the will had been found and Mary Kathleen's wishes adhered to). A series of coincidences, however, brings the will (and Starbuck's involvement in its concealment) to light. This results in Starbuck losing his job, in RAMJAC being dissolved, in Starbuck being convicted of a crime (concealing a will) and in his being sent back to prison. Thus the novel ends where it began - with its central character jailed for a crime he says he didn't know he was committing.

More summaries and resources for teaching or studying Jailbird.